Zambia has agreed the terms of a $1.4bn bailout with the IMF, a crucial step towards ending a debt crisis in the copper-rich but near-bankrupt nation.

The deal has been several years in the making and is a step forward for a country that last year became the first African nation to default since the start of the pandemic.

Friday’s deal for a three-year extended credit facility will still need approval from the IMF’s board, but is a landmark for President Hakainde Hichilema’s government months after he unseated Edgar Lungu who dragged out talks with the fund even as Zambia’s debts spiralled.

Africa’s second-biggest copper producer is struggling under about $15bn of external debt, including arrears, after a spending splurge gave way to an economic slowdown under Lungu.

Hichilema, who has said that he inherited a “completely empty” treasury after winning elections in August by a landslide, needs the IMF deal to convince Chinese and private creditors to restructure their debts and to secure other financial support from bilateral lenders. 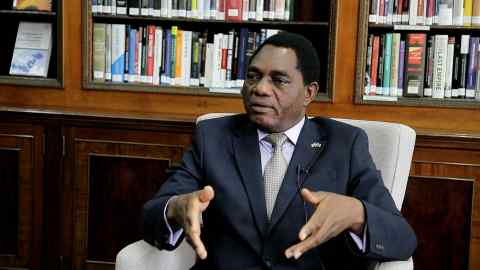 Zambia last year stopped payments on $3bn of US dollar eurobonds and negotiated debt reprieves with Chinese lenders. The agreement with IMF staff “is based on the authorities’ plans to undertake bold and ambitious economic reforms,” said Allison Holland, the IMF mission chief to Zambia.

After coming to power Hichilema had aimed to “finalise negotiations with the fund, that had [been] protracted for years, within the shortest possible time”, said Musokotwane. “This is exactly what we have done.”

Hichilema’s government now faces difficult sacrifices to comply with IMF conditions. It has pledged to cut Zambia’s fiscal deficit to 6.7 per cent of gross domestic product next year, down from 10 per cent this year, and then to aim for surpluses.

The government has promised to protect health and education programmes and to devolve much more spending to local government. A revival in world copper prices this year has cushioned state revenues.

Even with IMF support, Hichilema will have a tough task to balance the competing interests of Zambia’s creditors in talks that his government is aiming to finish early next year.

The finance ministry has already revealed that the share of Zambia’s debt owed to China is $6bn, or about double what had been previously reported. Bondholders have expressed fears that any money they give up will be used to pay off Chinese creditors. The government has pledged equal treatment of all creditors.

Zambia has already received $1.3bn of funds from the IMF this year under the global allocation of special drawing rights to member countries.