Venezuela’s economy is showing signs of recovery, its president has claimed, after five years of acute economic crisis and hyperinflation.

Nicólas Maduro told the country’s congress that the economy grew 7.6 per cent in the third quarter of last year and probably grew “more than four per cent” in the year as a whole, hailing it as “a marvellous achievement”.

“After five years of economic war, boycott and blockades, Venezuela is back on the path of economic growth,” he said in his weekend address, adding that exports jumped 33 per cent in 2021.

If Maduro’s figures are accurate — estimates from economists vary significantly — they would be the oil-rich country’s first growth in gross domestic product in eight years. During that time the economy has shrunk by about 75 per cent, turning what was one of the largest economies in South America into one of its smallest.

The socialist government’s decisions to loosen currency controls, relax import restrictions and encourage informal dollarisation have revived fortunes. Credit Suisse recently said it expected 2021 growth to come in at 8.5 per cent and predicted further expansion of 4.5 per cent this year.

The bank said its assessment “stems largely from the improvement in oil output” as well as more dollarisation, increasing imports, improving tax revenues and other factors.

Other economists are less bullish but agree the economy is growing again following the worst of the coronavirus pandemic.

“Our forecast for 2021 was for consolidated growth of 2.5 per cent, and for 2022 we are predicting growth within a range of 3-5 per cent,” said Tamara Herrera, chief economist at Síntesis Financiera, a consultancy in Caracas.

The return to growth, albeit from an extremely low base, comes as hyperinflation in Venezuela finally burns itself out.

According to the central bank, monthly inflation was 7.6 per cent in December — its 12th consecutive month below the 50 per cent mark that economists generally regard as the threshold for hyperinflation. Annual inflation last year was 686 per cent, the bank said — down from nearly 3,000 per cent the previous year.

Steve Hanke, a professor of applied economics at Johns Hopkins University, says the first hyperinflationary bout, from 2016 to 2019, lasted 28 months — the fifth-longest on record. A second bout in 2020 lasted nine months. 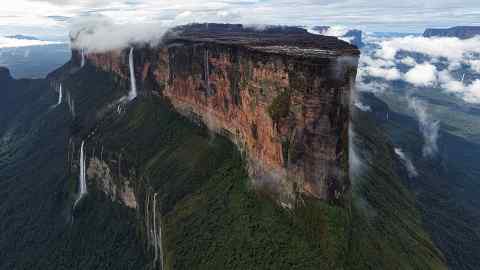 According to the Venezuelan Observatory of Finance (OVF), a non-government body that measures price rises slightly differently, hyperinflation began in 2017 and has not stopped, making this the third-longest bout on record surpassed only by Nicaragua in the late 1980s and Greece during the second world war.

The rate of price rises prompted most Venezuelan businesses to switch to using dollars, which are now used for around two-thirds of all transactions in the country.

The central bank has also intervened to prop up the Bolívar. “The key in the recent improvement in inflation has been the central bank’s intervention in the foreign exchange market, which is keeping the exchange rate contained,” Credit Suisse said.

However even the most optimistic forecasts point to annual price growth in the low triple digits in 2022, which still “constitutes chronic high or galloping inflation”, said Peter West, economic adviser at EM Funding in London.