Washington has suggested Lithuania consider changing the name of Taiwan’s representative office in the capital Vilnius in an effort to help ease tensions between the Baltic state and China since the mission was established.

According to several people familiar with the situation, US diplomats have floated the idea of changing the name with Lithuanian officials. They said Washington thought the choice of name had opened the door to Chinese coercion that risked undermining the expansion of ties with Taiwan.

China has retaliated by blocking imports from Lithuania and warning European companies, such as German car parts maker Continental, not to use components from the Baltic country.

The White House denied the administration had suggested changing the name of the office. “Anyone who suggests otherwise is not reflecting actual discussions between the US and Lithuania,” said a spokesperson for the National Security Council, adding that the US had told Lithuania that it would support its sovereign decisions.

“We respect and support Lithuania and Taiwan’s efforts to enhance their ties and practical co-operation,” the spokesperson added.

The diplomatic row has created a headache for Washington, which wants to help Taiwan bolster its international presence without giving Beijing an opportunity to accuse the US of violating its “one China policy”, under which Washington views Beijing as the sole legal government of China.

Taipei last year asked the US for permission to include “Taiwan” in the name of its Washington office, but the US has not acted on the request.

In a meeting this week that included Nauseda in addition to the foreign minister and opposition members, business leaders said they had been “sacrificed” for an unpopular policy. But Prime Minister Ingrida Simonyte has been adamant that the government will not budge.

The Lithuanian foreign ministry said claims that the US had proposed changing the office’s name were “false” and a “disinformation campaign”. The Taiwanese representative office in Washington did not comment.

Lithuania has been a vocal critic of China over human rights violations. Last year, it withdrew from the 17+1, an informal grouping of central and eastern European countries with which Beijing wanted to improve ties.

Underscoring the tensions in Vilnius, Nauseda this week urged the foreign ministry to implement a de-escalation plan in agreement with EU partners.

Brussels has offered rhetorical support to Lithuania, but has not provided an official joint response as it looks to a planned summit with China in March. The EU has repeatedly stated its commitment to the one China policy, while saying it was “ready to stand up against all types of political pressure and coercive measures applied against any member state”.

While some argued that changing the name would be seen as caving in to Beijing, others said the dispute undermined real achievements for Taiwan. 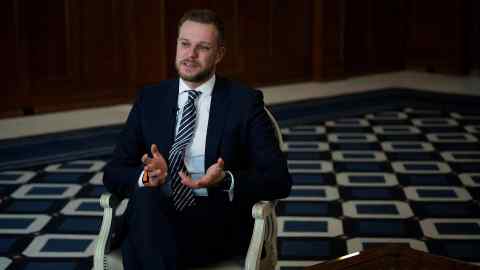 “Letting this crisis fester is likely to have a bad outcome for Lithuanian interests, and perhaps for Taiwan’s as well,” said Bonnie Glaser, a Taiwan expert at the German Marshall Fund who added that Chinese economic coercion was unacceptable. “The establishment of a new office and the rapid expansion of Lithuania-Taiwan ties is a big win for Taipei regardless of what they call the office.”

Taiwanese officials said they were not aware of a US proposal. One said some Lithuanian and EU officials had considered changing the name to placate China but had concluded that this would not solve the problem.

“Once they start to compromise on Taiwan’s name . . . it would let the Chinese smell that what they are doing is working, and encourage China to put more pressure on Lithuania and others,” the Taiwanese official said.

*This article has been amended to clarify the status of the Taiwanese representative office in Washington.