The US trade ambassador has admitted that America needs to make a “course correction” in the Asia-Pacific region, as Washington attempts to re-establish its economic superpower credentials following its withdrawal from a trade pact under Donald Trump.

But in an exclusive interview with the Financial Times on Thursday, Tai set out the ways in which the US planned to strengthen relations with partners without joining the regional pact. She argued that there were other structures that were better placed to address challenges than a trade deal negotiated more than eight years ago.

Tai said that a focus of her visit, which comes amid a phase of greater Chinese assertiveness, had been to impress upon partners such as Japan the “durability” of US trade policies.

“The goal of this is to accomplish a course correction,” she said when asked if she was redressing a credibility deficit in the Asia-Pacific region. She added that for US allies in the region, there was an obligation to offer “a durability for our trade policies that will enjoy a broad base of support politically”.

Tai added that there was “a real opportunity for collaboration between the United States and our partners here on challenges that we face together from China’s non-market policies and industrial policies”.

Joe Biden, the US president, has tried to strengthen his country’s relationships with allies in Asia in a bid to counter China’s rising economic and military might.

During her visit to Tokyo, Tai agreed on a new bilateral trade partnership with Japan. Few details of the deal were revealed by either side, which people close to both governments believe was a symptom of US political sensitivities surrounding trade.

Even if the Biden administration thought there was no better option than joining the CPTPP, analysts said, domestic pressures meant it could not pursue regional trade pacts.

Japanese trade officials said that the emphasis of Tai’s visit appeared to have been on drawing a clear line under the Trump era. The Japanese side said that the new bilateral framework represented a US response to Tokyo’s calls for greater US involvement in the Indo-Pacific region.

Tai meanwhile described the partnership as a platform to address issues, such as the post-Covid recovery and climate crisis, that did not fall under the scope of existing regional trade agreements. 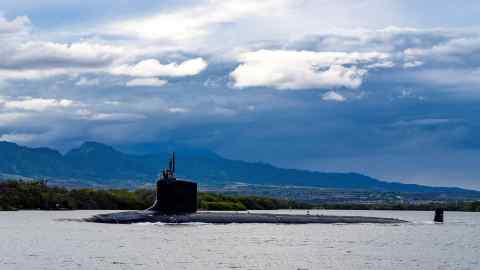 “There really is so much for us to work on and talk about. The challenges in the global economy are coming at us fast and furiously. And there’s no time to waste. And I think these structures are going to be incredibly valuable to us in strengthening our relationship,” she said.

Tai’s tour, which includes stops in South Korea and India, takes place almost four years after the US abruptly pulled out of the TPP even though it had played a central role in its creation. In the wake of its collapse, the TPP was replaced with the CPTPP, which has now attracted applications from both China and Taiwan.

Tai said that the global and regional situation — in particular relating to the environment and post-Covid recovery — was now very different from when the original 12-member partnership had been negotiated over eight years ago.

“In this moment when we are all still struggling to accomplish really robust economic recoveries, and trying [to come] out of the pandemic . . . those are the issues that are most pressing, and most relevant to our partnership and our commitment to the region,” she said.

Tai’s comments coincided with mounting concerns over the robustness of supply chains, resource security and whether the combination of those issues would accelerate a “decoupling” of China and other economies in the Asia-Pacific region.