Don Beyer, a 71-year-old Democratic lawmaker from Northern Virginia who represents one of America’s most prosperous congressional districts, had for weeks, and without any qualms, been pushing for higher taxation on the ultra-wealthy.

So he could finally breathe a sigh of relief this week when Joe Biden embraced a new surtax on the income of multimillionaires earning more than $10m a year, as part of a compromise plan to pass the US president’s $1.75tn spending agenda.

“It’s not going to make a whit’s difference in their lifestyle, their happiness, their lifespan, anything — to pay a little bit more,” Beyer — a former car dealership owner who also served as US ambassador to Switzerland — tells the Financial Times. “And their country gains from it”.

If approved by Congress, the new levy on multimillionaires singling out the very wealthiest American families and individuals — in this case the top 0.02 per cent of taxpayers — would be a recognition of a significant shift to the left within the Democratic party on fiscal policy in recent years. And would raise as much as $230bn.

Since the global financial crisis and even more so because of the pandemic, an increasing number of Democrats including Biden have backed more aggressive taxation of rich households and large corporations, bolstered by polls showing broad support for such measures among the American public.

Democrats including Biden see higher taxation on the wealthy and most profitable companies as a way to reduce entrenched income and racial inequalities and strengthen the structure of the US economy. But they also want to use the revenue to fund key government investments, in Biden’s case a sprawling Build Back Better plan including measures to fight climate change and expand the social safety net.

But despite the probable inclusion of the multimillionaires’ tax in the final economic package, Democrats have in recent weeks reckoned with the head-spinning realities of passing more sweeping tax increases through Congress.

Biden and his economic team had originally wanted to generate the bulk of the revenue for his economic agenda by unwinding the core features of Donald Trump’s signature 2017 tax cut plan, raising income tax rates on wealthy individuals and corporations, as well as capital gains tax rates.

When Alexandria Ocasio-Cortez, the New York lawmaker, attended a gala dinner at the Metropolitan Museum of Art last month with “tax the rich” written in red letters across her white dress, those goals seemed likely to be achieved. But that effort came crashing down last week due to the opposition of Kyrsten Sinema, a moderate Democratic senator from Arizona, forcing tax officials at the White House and those who write tax law in Congress to scramble to find alternatives.

For a few days, Democrats seriously considered a novel tax on the unrealised gains of about 700 US billionaires such as Jeff Bezos and Elon Musk in an effort to cover the cost of Biden’s spending plans — a variation on the notion of a wealth tax that had been proposed by Elizabeth Warren, the Massachusetts senator, during her failed bid to win the 2020 Democratic presidential primary.

The billionaires measure was shot down within hours of being formally proposed by Ron Wyden, the chair of the Senate finance committee, on Wednesday. Joe Manchin, the pivotal centrist West Virginia Democrat senator, said he didn’t “like the connotation that we are targeting different people” in the billionaire’s tax.

Musk, too, reacted angrily, suggesting it would not be long before others would be also hit with higher taxes. “Eventually, they run out of other people’s money and then they come for you.” the Tesla chief executive tweeted.

“A lot of the tax increases on the wealthy seem to have disappeared from the package,” says Bill Gale, a chair in federal economic policy at the Brookings Institution, a Washington think-tank. “There are some substitutes . . . but they seem like weak tea to me compared to the original set of proposals.”

Over the past two decades, according to OECD data, the tax-to-gross domestic product ratio in the US fell from 28.3 per cent in 2000 to 24.5 per cent in 2019 — while the average for advanced economies rose slightly over the same time period and remains well above American levels.

During the George W Bush and Trump administrations, Republicans comfortably passed large-scale tax cut packages using their own majorities in Congress, even if they sharply increased US deficits.

Barack Obama did not seriously attempt to pursue major changes to the tax code in a progressive direction until it was too late after Democratic defeats in the 2010 midterm elections, giving priority to healthcare and Wall Street reforms. Biden is trying — and struggling — to do it now.

“Maybe we’re not quite prepared yet to support a large-scale overhaul of the tax system,” says Michelle Holder, president of the Washington Center for Equitable Growth, a think-tank. “But maybe this is a baby step in that direction.”

One of the thorniest problems for Biden has been that some moderate Democrats have even been pushing in the opposite direction: to loosen the tax burden on the wealthy by repealing a cap on state and local tax deductions introduced by Trump and which affects mostly Democratic and wealthy states such as New York, New Jersey and California.

Meanwhile, Republican critics have attacked Biden both on the substance of the proposed tax increases — as damaging to the US economy just as it faces other challenges from supply chain bottlenecks to high inflation — and on the messy legislative process surrounding them.

“This is just a grab bag of half-baked ideas to figure out how they can run one of the largest expansions of government since the 1960s,” says Antonia Ferrier, a former Republican aide in the Senate finance committee now at CGCN, a consultancy. “Desperation is pushing them to try and find any idea which will be palatable to their razor-thin majorities.”

Democrats were hoping at least to be able to raise the corporate income tax to 25 per cent, from the 21 per cent level it was lowered to under Trump and which remains in effect. When that floundered last week, they opted to set a domestic minimum tax of 15 per cent on “book” income reported to shareholders, which should make it far harder for companies to use tax breaks and loopholes to substantially lower their bill. “At least there’s a floor under which corporations simply can’t escape paying something,” says Holder.

They also unveiled a 1 per cent tax on share buybacks by the largest US businesses, to disincentivise returning money to investors rather than ploughing it into the company or increasing wages for workers. And, on the international front, the new Biden plan includes setting a 15 per cent minimum tax on global profits, to match a landmark agreement reached this year at the OECD on international corporate taxation.

Even though corporate America was able to preserve its 21 per cent income tax rate, the Business Roundtable, the lobby group for blue-chip companies, criticised Biden’s plan. It said the measures would “aggravate the serious competitive disadvantage faced by US companies relative to their foreign competitors, none of whom pay a minimum tax on earnings abroad”, according to Josh Bolten, its chief executive.

If Biden’s package is approved, which is still an open question, many progressives will have to accept that the tax plan will be significantly weaker than what they might have envisaged or hoped for just a few months ago.

Warren blamed the setbacks on lobbyists swarming congressional offices, but said she remained hopeful that one day there will be a broader tax crackdown on the wealthy and large companies.

“The voices of the billionaires are a whole lot louder than the voices of anyone else,” she told MSNBC on Thursday. “[But] I think we’ve just finally reached a point where not only do the American people say ‘enough’, we might actually get people on Capitol Hill saying ‘enough’.”

Beyer says the Democrats have simply ended up with a “different kind of progressive approach” than originally conceived — “one that focuses much more on the very wealthy and the most successful corporations” — whereas the original plan based on raising rates was going to “affect a lot more people” but with “smaller impacts”. 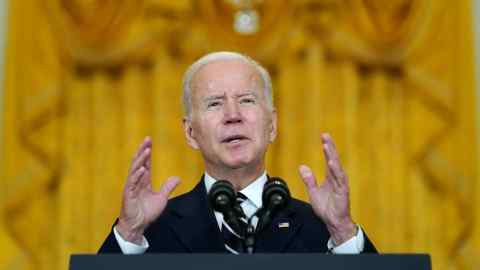 The multimillionaires’ tax would impose a 5 per cent surtax on incomes over $10m and a further 3 per cent levy on those over $25m — and would apply to earned as well as investment income. In addition, Democrats are proposing to beef up funding for the Internal Revenue Service to more aggressively enforce existing tax laws on the wealthy. For some left-leaning economists, Democratic aides and White House officials, the new and remaining provisions in the plan are enough to celebrate — for now.

“It doesn’t deal with the runaway, really dynastic wealth in our economy. It doesn’t reduce seriously the structural inequities in the tax code, be they racial or gender or economic,” says Niko Lusiani, director of the corporate power programme at the Roosevelt Institute. “But if you step back and just think of this as it was actually proposed, as a progressive revenue raiser for some very large public investments . . . it is a pretty important step forward.”