The US consumer price index rose 7.5 per cent last month compared with January 2021, its fastest annual pace since 1982, putting pressure on the Federal Reserve to act more aggressively to tame inflation.

The data released on Thursday by the Bureau of Labor Statistics showed CPI surging above its previous 40-year high of 7 per cent on an annual basis recorded in December — surpassing economists’ expectations.

On a monthly basis, CPI rose by 0.6 per cent from the previous month, a steeper increase than predicted by economists, as Americans paid higher prices for a wide range of goods including food, electricity and shelter.

US Treasury yields jumped after the report as traders bet on higher interest rates. The persistence of high inflation has already prompted the Federal Reserve to speed up its timetable for tightening monetary policy, with the first interest rate increase since the onset of the pandemic expected to be approved next month.

Some economists said the Fed may have to take a more forceful approach to cool down the economy this year, with larger and more frequent interest rate increases, rather than doing so gradually.

The yield on the two-year note reached 1.48 per cent after the data were released, the highest level since January 2020, up roughly 0.12 percentage points on the day. The 30-year yield, which moves with inflation expectations, also rose to a multi-month high on the report. The benchmark 10-year Treasury yield jumped 0.06 percentage points as traders sold US government bonds following the report.

After the January CPI data was released, investors bet that the Fed would approve nearly six quarter-point interest rate increases by December, as well as higher odds on a 0.5 percentage point increase in March.

US stock markets fell at the start of trading, with the biggest move in the tech-heavy Nasdaq. Tech companies, particularly those with higher levels of debt, have been hurt by rising interest rate expectations this year as their future borrowing costs are set to increase. 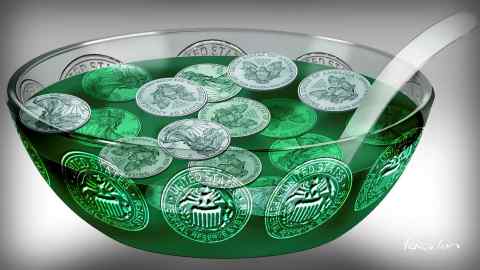 The Fed has not committed to any particular pace for its tightening cycle, saying the tempo and scale of the rate increases would depend on the data.

“The task before us is to remove accommodation at the pace necessary to bring inflation under control. As this process continues, our monetary policy decisions will need to be data-driven and forward-looking,” Loretta Mester, the president of the Cleveland Fed, said on Wednesday.

High inflation has not only challenged the Fed but also proved to be politically problematic for President Joe Biden and members of the Democratic party heading into the midterm elections.

Although the recovery has benefited from strong job growth — including in January — and rising wages, those positive factors have been undermined by the increase in the cost of living and supply chain disruptions, exposing the Biden administration to a barrage of attacks from Republican lawmakers.