US consumer prices are expected to have surged in October at their fastest pace in three decades, as bottlenecks and other supply-chain disruptions intensify and inflationary pressures broaden.

Consensus forecasts compiled by Bloomberg indicate that the consumer price index to be published by the Bureau of Labor Statistics on Wednesday rose by 5.9 per cent in October from a year ago — the fastest annual pace since 1990 and a sharp increase from September’s levels of 5.4 per cent.

Month-over-month price gains are also expected to have increased, with a jump of 0.6 per cent pencilled in. While that is markedly lower than the 0.9 per jump reported between May and June, it represents a significant acceleration from the August to September period, when prices rose 0.4 per cent.

Once volatile items such as food and energy are stripped out, economists expect monthly increases of 0.4 per cent, double the most recent reading. On an annual basis, that pace is forecast to register at 4.3 per cent. In September, it stood at 4 per cent. 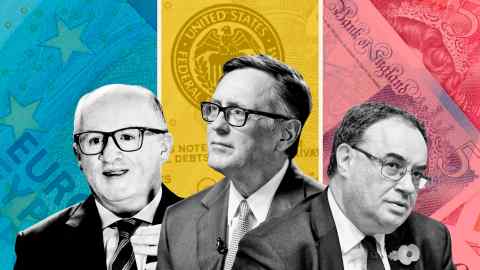 The incoming data will reinforce the view that inflationary pressures are proving far more persistent than initially expected — a growing risk the Federal Reserve acknowledged last week when it announced its plans to begin scaling back its $120bn asset purchase programme later this month.

While costs have moderated in recent months in some sectors most sensitive to the economic reopening from the coronavirus pandemic, including used cars and travel expenses, prices are picking up elsewhere.

Rents and other shelter-related costs, which represent about a third of CPI, have steadily risen in recent months, while certain services are also becoming more expensive as employers raise wages to grapple with a severe worker shortage.

Worsening supply-demand mismatches have also pushed up energy prices, and pernicious bottlenecks have made many goods, from household items to new cars, considerably more expensive.

But Powell and Clarida have indicated the Fed is monitoring the situation closely and stands ready to use the central bank’s tools if necessary.

One popular gauge of interest rate expectations, eurodollar futures, suggests the Fed will raise its main policy rate around September 2022.