The US has reached an agreement to ease Trump-era tariffs on Japanese steel as President Joe Biden presses to relax trade tensions with American allies.

The US will suspend its 25 per cent levy on steel imports of up to 1.25mn tonnes a year beginning April 1, according to the deal with Japan announced on Monday. A 10 per cent tariff on aluminium will remain in place.

Donald Trump’s administration imposed tariffs on a range of countries in 2018 on the grounds that cheap foreign metal imports posed a threat to national security.

In a statement, the US and Japan agreed to co-operate on tackling overcapacity in the global steel market as a result of subsidies in non-market economies, as well as on the carbon intensity of the steel and aluminium sectors.

Katherine Tai, the US trade representative, said the agreement would help Washington and Tokyo “work together . . . to combat China’s anti-competitive, non-market trade actions in the steel sector, while helping us reach President Biden’s ambitious climate agenda”.

Japan will begin to put in place its own antidumping tariffs within six months, the statement said, and would confer with the US on “potential domestic measures to address non-market excess capacity”.

The tariffs were controversially based on national security grounds taken from Section 232 of the US Trade Expansion Act of 1962 — a justification that irritated Washington’s allies.

The deal with Japan is similar to one struck by the Biden administration with the EU in October, which lifted tariffs on billions of dollars of transatlantic metal trade.

As part of that agreement, Washington and Brussels pledged to co-operate on addressing Chinese steel overcapacity and to reach an agreement aimed at carbon emissions in the sector by 2024.

The US agreement with Japan did not set out a timeline for any further commitment to reduce carbon produced by steelmaking, but White House officials said the two would begin to “discuss methodologies and share data” related to emissions. 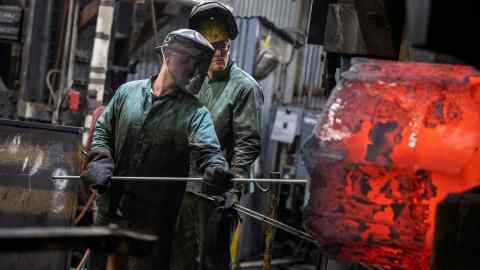 This year, the US said it would begin talks over lifting tariffs on the UK’s steel and aluminium exports. The Financial Times reported last year that the US was delaying talks because of Washington’s concerns about London’s threats to change post-Brexit trading rules in Northern Ireland.

Washington believed repeated threats by former Brexit minister Lord David Frost to suspend the Northern Ireland protocol, which ensures there will be no trade border on the island of Ireland, compromised the Good Friday Agreement of 1998, which brought peace to the region.

Frost resigned just before Christmas and Liz Truss, the UK foreign secretary now in charge of talks, has taken a more conciliatory tone.

The Trade Secrets Newsletter is the FT’s must-read email on the changing face of international trade and globalisation. Written by FT trade specialist Alan Beattie, it is delivered to your inbox every Monday. Sign up here