UK environment secretary George Eustice on Tuesday welcomed a “big de-escalation” in the dispute between Britain and France over post-Brexit fishing rights, after Paris pulled back from immediately imposing sanctions.

Emmanuel Macron, president of France, had threatened to introduce punitive measures against the UK from Tuesday if Boris Johnson’s government did not grant more licences to French fishermen wanting to operate in British waters.

Late on Monday Macron said he would delay the measures to “give a chance” to last-ditch talks that are meant to resolve the dispute and were convened by the European Commission. “You don’t impose sanctions while negotiations are continuing,” he said on the sidelines of the UN COP26 climate summit in Glasgow.

Responding to Macron’s move, Eustice said there had been “constructive” talks between the two sides.

“It’s a big de-escalation,” he told the BBC on Tuesday. “We very much welcome the fact that France has decided not to go ahead with its threats, and we’ll continue to have those constructive discussions.”

Johnson described the row over fishing rights as “vanishingly unimportant” when compared to the issues being addressed at the UN summit.

But tensions between London and Paris over fishing rights have been simmering for months after the UK did not issue licences for some small French boats to operate in British waters.

The UK insists it has refused licences only for fishermen who did not provide evidence of operating in British waters before Brexit, but France argues London is deliberately targeting its vessels.

Paris accuses London of issuing only half the licences it is entitled to under the EU-UK trade deal finalised late last year. London states it has issued permits to 1,673 EU vessels, 98 per cent of all applications, to fish in the UK exclusive economic zone since December 31.

Eustice said: “We had constructive talks . . . where we made clear that if there are additional vessels that have got evidence and they can bring that new evidence forward, we’ll obviously consider it.” 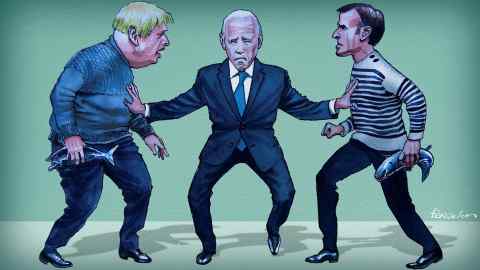 Johnson’s spokesperson said the UK government welcomed “France’s acknowledgment that in-depth discussions are needed to resolve a range of difficulties between the UK and EU”.

“We want to find consensual solutions together if we can and Lord Frost has accepted Clément Beaune’s invitation and looks forward to discussions in Paris on Thursday,” added the spokesperson. “They will be discussing issues including fisheries and the Northern Ireland protocol.”

Bruno Bonnell, an En Marche MP for Villeurbanne, near Lyon, suggested Johnson had been “bluffing all along” about Brexit.

Johnson had been “continuously pretending that Brexit will have no impact, no effect, on the UK lifestyle”, Bonnell told the BBC.