The UK government is to begin trials next year of a “smart” customs border involving cutting-edge technologies that it hopes will reduce trade frictions for British importers.

UK companies will this week be asked to submit bids to pilot the new system, with the aim of starting trials at a port in May, according to senior officials in Whitehall.

The announcement of the plans, described as building a “Rolls-Royce system for moving goods”, come as the government prepares to begin implementing full customs checks on EU imports from January.

Last week the Federation of Small Businesses, a trade body, warned that only a quarter of companies were ready to handle the new paperwork, including real-time customs declarations and pre-notification to UK authorities of imports of animal and plant products.

To smooth the post-Brexit border, the UK has committed to spending £180m to build a “single trade window” system by 2025, which will streamline customs processes by enabling UK border agencies, including HM Revenue & Customs and health authorities, to share information in real time.

Further agreements are what is truly vital if we are to smooth the navigation of the GB-EU customs border for traders.

Among the ideas that are expected to be tested in the mid-2022 trials are shipping container seals that automatically alert the authorities when tampered with, and the geo-tracking of goods using GPS technology to catch any lorry making unscheduled stops or diversions.

Officials said that in time, such technologies should help create highly auditable supply chains that can be easily monitored, allowing businesses to do more self-assessment than currently possible away from the border.

They added the government hoped it would avoid the pitfalls of previous state-run IT projects by going direct to UK businesses and the technology industry. “We want big and bold solutions,” said one official.

The venue for the six-month long trials is still to be determined, but will be a “live port environment” at which the port, technology providers and import-export businesses could demonstrate the effectiveness of the system.

Ministers are expected to claim the new border as a benefit of Brexit, since the UK is no longer bound by EU rules. Last October, Lord David Frost, the UK Brexit minister, said Britain was “never going to adopt the same levels of checks” as the EU.

However the EU is also in the process of devising a “single customs window” that could in the future reduce some of the burdens on UK exporters to the bloc.

Experts welcomed the UK’s plans to use technologies to reduce burdens at the border, which HMRC estimated in 2019 would require nearly 200m extra customs declarations at a cost of £7.5bn a year to British businesses. 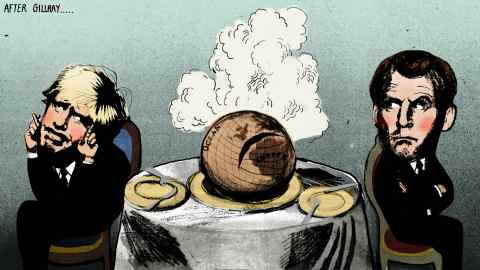 Sam Lowe of Flint Global, a consultancy, said UK dependency on high-speed, “roll-on, roll-off” trade with the EU was likely to incentivise Britain to digitise its border even faster than the bloc.

“In the next 10 years the UK will probably have one of the most efficient borders in the world out of sheer necessity, which you could say is a ‘Brexit dividend’ of sorts,” he added.

William Bain, head of trade policy at the British Chambers of Commerce, a business lobby group, said there could be benefits for trade facilitation if the trials proved successful, but the government should prioritise improving the EU-UK trade deal.

“These trials should not be seen as an alternative to deeper customs co-operation between the UK and EU,” he added. “Further agreements are what is truly vital if we are to smooth the navigation of the GB-EU customs border for traders.”

David Henig, a former UK trade negotiator, said any aspiration to streamline trade was welcome but he cautioned that the government’s record on delivery of such projects had “not been great” in recent years.

He added even if bureaucracy was reduced on goods entering the UK from mainland Europe it would still be “far greater than seamless trade the UK enjoyed as a member of the EU’s single market”.