Boris Johnson’s government has offered a significant climbdown in talks with the EU over post-Brexit trading relations in Northern Ireland, as the prime minister tries to end the toxic dispute.

A senior British official on Friday briefed London-based EU journalists that Johnson was no longer seeking the immediate axing of the European Court of Justice from its role in enforcing the so-called Northern Ireland protocol.

In a move described as “an important shift”, the UK official said that “no one is demonstrating on the streets of Belfast” in protest against the role of the ECJ.

The protocol is the part of the UK’s Brexit deal which aims to maintain an open border in Ireland. In exchange, some checks on east-west trade across the Irish Sea are needed.

Although Johnson still wants to settle the “governance” issue of the protocol in the longer term, EU journalists were briefed that the prime minister wants to focus for now on securing the smooth flow of goods between Great Britain and Northern Ireland across the Irish Sea.

“If the negotiations fail it won’t be because the UK is insisting on taking the ECJ out of the protocol,” the official said, adding that London accepted that the European Commission did not have a mandate from member states to discuss the excision of the ECJ from the deal.

According to journalists at the briefing, they had been summoned specifically to report the “shift” in UK government thinking — an olive branch that could help broker a deal with Brussels.

But when accounts of the briefing started to emerge, Downing Street desperately attempted to downplay what had been said, fearing it had undermined the negotiating position of Brexit minister Lord David Frost.

A government spokesman said: “This is an inaccurate characterisation of our position. Any durable solution must address the full range of difficulties created by the protocol, including on the ECJ.”

In spite of that statement, the formal briefing of a group of EU journalists suggests Johnson wants to “park” the ECJ issue to secure a breakthrough in other areas.

Both sides have been talking for weeks about a dramatic reduction of checks on goods at Irish Sea ports, including medicines, animals and foodstuffs, and on reducing customs inspections. 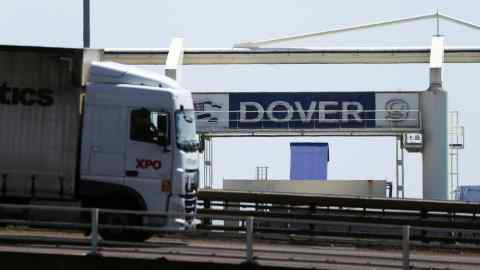 Stefanie Bolzen, London correspondent of Die Welt, tweeted that the UK official said: “If Protocol works as advertised, it can provide advantages” for Northern Ireland, which uniquely has a foot in both the UK and EU markets for goods.

The apparent concession by the UK comes amid pressure from Washington on Johnson not to follow through on his threat to activate the Article 16 override mechanism, that would allow him to suspend parts of the deal.

The US is refusing to remove tariffs on UK steel and other metals, with senior figures in Washington linking that stand-off to Johnson’s threats over the operation of the protocol.

The mood has become more constructive in recent weeks. EU diplomats believe a turning point came in early November when member states made clear that if Article 16 was triggered they could respond by revoking the entire post-Brexit Trade and Cooperation Agreement, with a year’s notice.

The UK has raised the ECJ issue in talks only briefly since then, commission officials said. Diplomats say it has been content to discuss other matters first.

While still emphasising the gap between UK demands and the EU offer, Frost has also talked about the possibility of finding a solution.

Frost said after talks on Friday that he and his EU opposite number Maros Sefcovic would meet twice next week as they pushed for a deal.