Sahap Kavcioglu, who took the bank’s helm in March after president Recep Tayyip Erdogan fired his predecessor, dismissed concerns about rapidly rising prices and the weakening lira — even as he predicted that inflation would be close to four times its official 5 per cent target this year.

He told a press conference in Ankara that Turkey needed to “seize the opportunity” presented by the pandemic to become a centre of production and expand its exports thanks to a cheaper currency.

Kavcioglu argued that this would help to turn the country’s longstanding current account deficit — caused by the fact that Turkey usually imports more than it exports — into a surplus.

“Turkey’s main problem is the current account deficit,” he said. “When we solve this problem and there’s a current account balance, the exchange rate will return to normal.”

Although Turkey posted a current account surplus in August for the first time in almost a year, thanks to a surge in tourism income, analysts expect it to return to a deficit if growth picks up pace. That could put fresh pressure on the already struggling lira, which is down about 20 per cent against the dollar this year.

Roger Kelly, an economist covering Turkey at the European Bank for Reconstruction and Development, said “part of” the governor’s argument made sense because “the idea that pushing selected high tech goods and intermediate goods that can be exported can help the current account is true”.

But he added: “The idea that current account balance can be achieved rapidly via an industrial policy based on a weak lira and selective financing for these sectors, rather than through productivity-enhancing structural reforms, seems short sighted.”

Kelly said that, in the short to medium term, a weak lira would be “highly inflationary and present significant challenges to the servicing of the extensive external liabilities of Turkey’s corporates”. 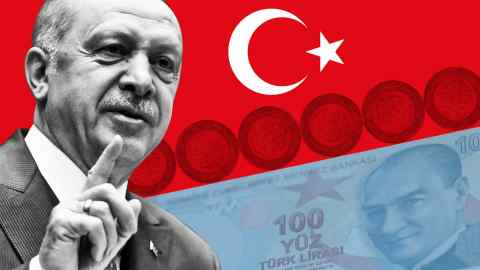 Turkey has about $170bn of external debt coming due in the next 12 months.

The country’s nominally independent central bank has faced increasing interference from Erdogan in recent years as he has consolidated his control over the country’s institutions.

The Turkish leader, who disagrees with the conventional economic wisdom that high interest rates help to curb inflation, has repeatedly pressed for lower rates in the hope of securing rapid growth even as it has come at the cost of rising inflation and financial instability.

The central bank has cut its benchmark rate by a total of 300 basis points to 16 per cent in recent months, bringing it below inflation, which stood at almost 20 per cent in September.

Kavcioglu said that he believed inflation pressures were “temporary” even as he raised the bank’s year-end inflation forecast from 14 per cent to 18 per cent.

He said that Turkey was “not planning”, as feared by some international investors, to return to its contentious previous policy of using its limited foreign currency reserves to prop up the lira. Instead, he argued that a future current account surplus would create “balance” in the currency and tame inflation.

Hakan Kara, a former chief economist at the central bank who was among a group of senior officials fired in 2019, suggested that the institution would “benefit from putting an end to press conferences for a while”.

In a veiled reference to Erdogan, he added: “Whoever gives the order for the interest rate should be made to answer the questions.”