Joe Biden will meet the leaders of Mexico and Canada at the White House on Thursday, after Justin Trudeau urged US lawmakers to reject protectionist policies amid a row over US electric vehicle subsidies.

The first trilateral meeting between the three heads of state since 2016 — the so-called “three amigos” summit — comes as Mexican and Canadian officials have complained that Biden’s plan to offer tax credits on US-made EVs, part of his $1.75tn spending package, breaks international trade rules.

The Canadian prime minister’s office said that Trudeau had spoken to lawmakers on Capitol Hill to “impress upon these key legislators the importance of bilateral co-operation”.

The summit will see the US president aim to strengthen diplomatic relations across North America as US officials seek to co-ordinate with allies to bolster critical supply chains and navigate the global crunch. 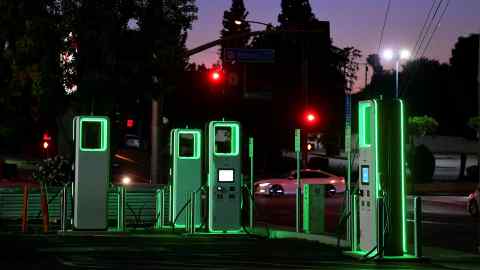 US officials said the three leaders planned to launch a supply-chain working group in a bid to “minimise future disruptions”, while other issues up for discussion included climate co-operation, health security and migration.

“North America is a platform that is critical to both our domestic economic success and as well as a partnership that can play a really critical role in resolving regional and global challenges,” a US official said.

Washington has been pushing to secure the supply chains of critical industries such as semiconductors, pharmaceuticals and electric vehicle batteries to reduce over-reliance on countries such as China.

Canada in particular is a rich source of minerals critical to the manufacturing of electric vehicles, such as lithium, nickel, cobalt and graphite.

On Covid-19, the three leaders are expected to reach an agreement that Canada and Mexico will share some of the vaccines donated to them by the US with other countries in Latin America and the Caribbean, a senior US official said. The official added that public health experts would determine the timing and number of doses.

Meanwhile, the US has expressed concerns about Mexican energy reforms, which sector experts say would make electricity more expensive and dirty.

Mexican president Andrés Manuel López Obrador said if the issue were to come up at Thursday’s summit, he was prepared to urge to his counterparts to help stop what he called abuses by foreign energy companies, which he believed benefited unfairly from contracts offered by the previous administration.

“Do you think it’ll be hard for me to say this to President Biden or Prime Minister Trudeau? No, I doubt they are in favour of protecting the corrupt,” he said in a morning news conference Wednesday.

A US official said the Biden administration “closely tracks” Mexico’s proposed energy reforms and was “prepared for the two presidents to discuss it”.