Rishi Sunak will join forces with the Bank of England on Thursday in an attempt to put the brakes on inflation, as he sets out plans to stop soaring energy bills causing a “cost of living catastrophe”.

The chancellor will announce plans to slash hundreds of pounds from soaring domestic energy bills from April, seeking to control prices at a time when inflation had been expected to peak at close to 7 per cent.

Meanwhile Andrew Bailey, BoE governor, is predicted to announce a rise in interest rates from 0.25 per cent to 0.5 per cent, confirming that fiscal and monetary firepower are both being deployed to hold down prices.

The co-ordinated announcements are intended to calm nerves among consumers and in the markets, as Ofgem, the energy regulator, announces its plan for a sharp lift in Britain’s energy price cap from April.

Ofgem moved forward to Thursday its announcement about the new level of the cap, which dictates bills for 22mn homes, from its original scheduled date of February 7.

Analysts are expecting an increase in the cap of around £650 to more than £1,900 per household per year.

Sunak will immediately respond with a House of Commons statement setting out how he intends to avoid what the Resolution Foundation think-tank has called a “cost of living catastrophe” unfolding.

The chancellor is expected to cut £200 from all household energy bills, according to those briefed on his plans, with money loaned to power companies which will be passed directly to consumers.

Sunak will attempt to claw back that money later, when wholesale energy prices fall, through a levy on future bills, according to people briefed on the plan. “Good headlines today at the risk of bad headlines in future,” said Resolution Foundation chief Torsten Bell.

The chancellor has also promised targeted help for the most vulnerable households, with the focus on how to expand on the existing “warm homes discount” scheme, currently worth £140 for 2.7mn households.

According to those briefed on his thinking, Sunak wants to expand that support to the 8.5mn households that receive universal credit and other state help. A £300 payment to that group could cost about £2.5bn, which the Treasury would not recover.

Such a proposal would see all households receive £200 off a projected £650 increase in energy bills, with poorer homes getting a £500 discount. The Treasury declined to comment on “speculation”.

Sunak’s main aim is to cushion households from a big increase in energy bills in April at the time when a £12bn annual increase in national insurance rates kick in. Income tax thresholds are also being frozen. Key local elections take place a few weeks later on May 5.

Most economists expect consumer price inflation to rise from the 5.4 per cent level seen in December to a peak of close to 7 per cent in April, mostly as a result of higher gas and electricity prices.

The discount on bills would shave around 0.4 percentage points from that peak level, lowering it to around 6.6 per cent, a figure that would still be the highest in more than 30 years. 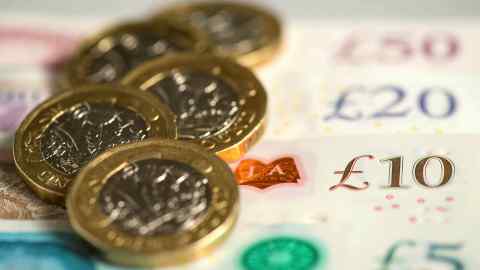 The BoE would be unlikely to limit interest rate rises on the basis of this subsidy because it is more focused on the projection for inflation two to three years into the future.

Meanwhile, the Treasury should benefit from a corresponding reduction in retail price inflation by lowering the cost of servicing its inflation-linked gilts, which are based on the RPI.

Reducing the RPI figure by around 0.4 percentage points would save the Treasury about £2bn a year on almost £500bn of outstanding index-linked gilts.

Energy industry executives are warning that measures taken now to ease the pain of April’s price increase could prolong the energy price crisis for years, as loans to suppliers to fund the £200-per-home rebate will have to be recouped via bills for years to come.

Energy companies have also questioned whether the measures will have to be repeated in October, when analysts anticipate a further sharp increase in the price cap to as much as £2,450 per year, based on forward energy prices.

Cornwall Insight, a consultancy, has also cautioned the cap may have to remain at historically high levels well into 2023. It is currently forecasting the cap in April 2023 will probably have to be nearly £1,850.

Energy is the world’s indispensable business and Energy Source is its newsletter. Every Tuesday and Thursday, direct to your inbox, Energy Source brings you essential news, forward-thinking analysis and insider intelligence. Sign up here.