Early in November, the esteemed Harvard professor Graham Allison went down to Washington’s Senate to deliver a Greek history lesson. The topic was the Athenian historian Thucydides who, of course, penned the account of war between Sparta and Athens in the fifth century BC.

This kind of conflict used to only excite students of the classics. But in 2017 Allison wrote a tome called Destined for War: Can America and China escape Thucydides’s Trap?, and it became a surprise bestseller. 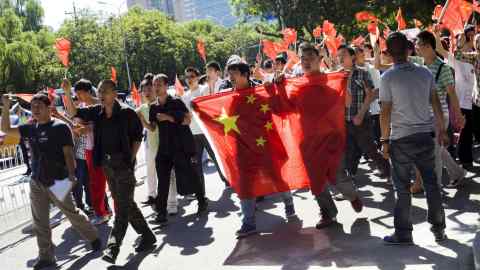 Allison argued — as Thucydides himself first noted — that whenever a ruling power is challenged by a fast-rising rival, it traps them in a pattern that can easily spark war. The dynamic between Sparta and Athens was one example of that.

Now US senators are wondering whether history is about to be repeated. Will sabre-rattling around Taiwan or recent revelations in the FT about hypersonic Chinese missile tests help create the “trap” again?

Allison’s message is both encouraging and depressing. To start with the latter: the core thing to understand from history, he explained to me (and the senators), is that power shifts create problems around three “Ps”: perception, psychology and (domestic) politics. Most notably, a ruling power that starts to feel insecure about a rival tends to overreact and miscalculate.

So too when a rising power feels snubbed. If this is combined with febrile domestic politics, small aggravations can quickly spin out of control as, say, when Archduke Franz Ferdinand was assassinated in 1914 in Sarajevo, which sparked the first world war.

Those three “Ps” are on display right now, and insecurity, belligerence and misunderstandings keep bubbling up. “When a rapidly rising power seriously threatens to displace an incumbent one you have a predictable dynamic,” Allison says. “If you look at China and the US as a rising and ruling power, they seem to be doing everything possible to stay on this script.”

Thankfully, outright hostilities have been avoided so far, but this does not mean that war is not a real risk. On the contrary, as hedge fund luminary Ray Dalio notes, a striking feature of the 21st-century world is that conflicts can erupt on many fronts, not just kinetic.

As Dalio recently told me, “There are five kinds of war, and they are not all shooting wars. There’s a trade war, a technology war, a geopolitical war, a capital war and there could be a military war. We are certainly in varying degrees in the first four of those . . . and there’s good reason to worry about the fifth type.”

On the other hand, the fact that war can be fought in so many ways in the 21st century might just possibly reduce the need for actual military conflict. It’s cold comfort for those on the receiving end but if China wants to threaten Taiwan, it does not necessarily need to do it with tanks or bombs. It can use cyber attacks, or other financial and trade weapons.

This is already happening in the US-China conflict. A senator recently told me that China is stealing $300bn-$500bn worth of intellectual property from the US each year and, while it is impossible for outsiders to verify that number, the fact that such figures are being bandied around suggests that a cyber war is already being waged — in all probability in both directions.

Similarly, this week in Washington new hints of a capital war bubbled up after a report from a bipartisan commission to Congress argued that China is using capital flows to attack America. That too is alarming, particularly to Wall Street leaders such as Jamie Dimon or Larry Fink, who want to do business there, and to those who hope that capital integration could reduce the chance of conflict. But the threat of a capital war, or trade war, is still less outright scary than the military type.

Of course, some like Dalio might retort that the former could lead to the latter. But there is one more reason for a modicum of optimism in the details of Allison’s own historical data set, neatly laid out online on a website run by Harvard’s Belfer Center. This lists all the Thucydides-style conflicts in centuries past and shows that while 12 out of 16 such geopolitical shifts did produce outright war, four did not.

The question is, were the four a fluke? Or a sign that humans are getting wiser? Might the globalisation ties that bind us together, such as the internet or those capital flows, mean that the Thucydides trap is not so relevant in a digital age?

We do not know (yet). However, Allison has one final encouraging nugget to share: since his book was published, it has not only become a bestseller in the US but has been extraordinarily popular in translation in China too. “I never ever expected that,” he chuckles, explaining that the most popular passage with Chinese readers is a description of how Britain and the US avoided a Thucydides moment in the early 20th century by not going to war. Even a trap can sometimes be escaped from.