Trying to get investments right in this pandemic-tossed world requires careful examination of the policies of the major central banks. The US Federal Reserve led the rescue from the virus crash in March 2020. The Bank of Japan and the European Central Bank have been important sources of support to financial markets and economies.

The Bank of China has pursued a tougher policy than the others, while avoiding recession. Chinese shares, as we expected, have been blighted by tighter money and attacks on excesses in sectors such as property.

Bond buying and low rates have bid up fixed income securities and pushed people into higher yielding shares, which have looked cheap compared with the poor running returns on bonds.

Today’s elevated share values owe much to central bank decisions to slash interest rates with a view to keeping asset markets awash with cash and keep longer term borrowing rates low. It was the Fed’s decision to create at least $3tn to offset the black hole of lockdown that persuaded me to be invested from the summer of 2020 in anticipation of a sharp recovery in share markets on the back of all that cash. 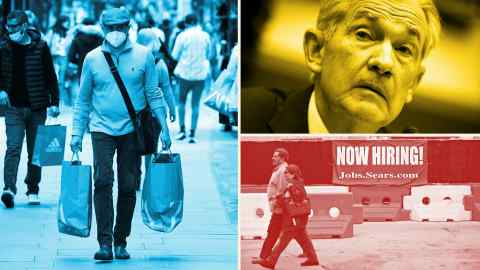 As this year draws to a close, the question is whether they will withdraw the stimulus too quickly for markets, as they seek to contain the inflation genie they have nurtured. So far we have had good returns for investors as the US has kept on running hot.

Markets have come to believe that the major central banks are independent and that this is a good thing. The ECB was modelled — partly on the Bundesbank — on the idea of independent experts setting short interest rates with a view to keeping inflation down. The Bank of Japan and the Fed have 2 per cent inflation targets as well.

The high noon of the idea of independent central banks providing discipline came in the first couple of decades of this century. The theory says they will be run by wise, impartial people, who understand economies and markets so well that they know when to expand money and credit and when to contract it by shifting interest rates, to keep inflation at around 2 per cent.

It is difficult to know why people believe this. After all, economies were badly scarred by the banking boom and bust, where central banks allowed commercial banks to expand credit and inflate asset values, only to stop them too abruptly in 2008 and cause banks to collapse, as well as triggering a big fall in markets and a great recession. The central banks managed to blame commercial banks for the excesses, without properly accepting their part in the boom and bust.

It has proved very hard to find these uniquely insightful people who can call it well and avoid major lurches. They are usually appointed by presidents or prime ministers with the help of finance ministers who have a political interest in the policies they follow. This year, several major central banks forecast inflation to be much lower than it turned out to be.

It is difficult to identify a fully independent central bank even during this era of fabled independence. Today we can see a trend of governments having more explicit influence.

Recep Tayyip Erdogan, Turkey’s president, flexed his power to appoint the central bank governor, seeking an appointee who will keep rates low or cut them, whatever the rate of inflation or the stresses on the currency. The People’s Bank of China makes no secret in all its statements that it sees its task as implementing the ideas and policies of president Xi Jinping and the Communist party.

The Fed itself has long had a dual mandate — to keep inflation down and to ensure decent growth. Where there is some tension between the two aims, the Fed has to make a judgment and would usually listen to the views of the administration.

Some central banks have been associated with extravagant fiscal policies. In some Latin American countries, they have been unable or unwilling to offset government excesses and ended up assisting or putting up with very high rates of inflation. Argentina and Venezuela are no great advertisements for the work of their central banks.

Joe Biden, the US president, has started to remodel the Fed, using his powers to make appointments to the board. He appears to have negotiated a policy platform for the new Fed between Jay Powell, its incumbent chair, and Lael Brainard, its newly appointed vice-chair, who wishes to move it closer to the full Democrat agenda.

The new Fed will take its duties towards net zero carbon emissions and social inclusion more seriously and may follow a tougher course against banking activities as regulator. Both the Republican-inclined chair and the Democrat vice-chair want to run the economy as hot as markets will allow, seeking a stronger and longer recovery. Both are worried about inflation, while Biden is encountering rough political criticism for presiding over inflation above 6 per cent.

Markets need to adjust to more political central banks. Mexico is getting a new central bank head from the government’s own ranks. The ECB is the custodian of the EU project, and will always take into account what is required to buttress and advance economic, monetary and political union. What is needed to reassure markets is that any given central bank is working well with its government, and that between them they take a responsible but market-friendly view.

The FT fund has benefited once again from US exceptionalism, where the combination of great technology companies and a very accommodating monetary policy have led to substantial gains.

As we reach the end of 2021, there are more worries about how fast the Fed will need to withdraw stimulus and how long inflation stays elevated. It does look, however, as if the world economy will continue to be backed by zero rates and plenty of extra money from the Bank of Japan and the ECB. The People’s Bank of China does not want to trigger a recession, but it is helping the government cut the tall poppies of the enterprise world, especially in property.

It is time for caution, not panic. The Fed will try to talk its way down from high inflation, and Biden will seek fixes to sort out the numerous supply bottlenecks to help. The Fed has a new political deal to find a way through that allows the Democrats to promote their vision of recovery and social justice.

Sir John Redwood is chief global strategist for Charles Stanley. The FT Fund is a dummy portfolio intended to demonstrate how investors can use a wide range of ETFs to gain exposure to global stock markets while keeping down the costs of investing. john.redwood@ft.com