Tesla warned that constraints in its supply chain would weigh on the electric carmaker’s results “through 2022” as it reported a record net profit of $2.3bn in the fourth quarter of 2021.

The quarterly figures demonstrated that the electric vehicle pioneer led by Elon Musk had deftly navigated the supply chain congestion and chip shortages that have plagued the rest of the car industry.

But on Wednesday, Tesla said in an earnings announcement that its factories “have been running below capacity for several quarters as [the] supply chain became the main limiting factor”, a trend “likely to continue through 2022”.

Tesla’s shares immediately dropped more than 5 per cent but later traded 1.5 per cent higher in after-hours trading as Musk, chief executive, spoke on an investor call.

Despite supply chain woes, Musk said Tesla’s volume growth this year should be “comfortably above 50 per cent”. Last year, Tesla delivered 936,222 vehicles, an annual gain of 87 per cent.

Musk also pledged to “solve” full self-driving technology in 2022 — a claim he has made in prior years without success.

Industry experts were sceptical that Tesla could achieve its self-driving ambitions, but that has not stopped the company from selling its driver-assist features for $10,000.

Over the long term, Musk said full self-driving features would become a core part of Tesla’s profitability, turning cars from depreciating assets in to products that increase in value over time as owners can lease them out to earn revenue.

“I would be shocked if we do not achieve full self-driving safer than a human this year,” Musk said.

Tesla’s net quarterly profit of $2.3bn was 760 per cent higher than a year earlier, but was nevertheless below the $2.55bn expected by Wall Street. The company has recorded 10 straight quarters of net profits. For all of 2021, it recorded $5.5bn in net profit, up 665 per cent from 2020.

Fourth-quarter revenue jumped 65 per cent from the same period a year before to $17.7bn, well above forecasts of $16.6bn.

Fans of the company seeking updates on the upcoming Cybertruck, Semi and Roadster vehicles left the earnings call disappointed, as Musk confirmed “we will not be introducing new vehicle models this year — that would not make any sense”. 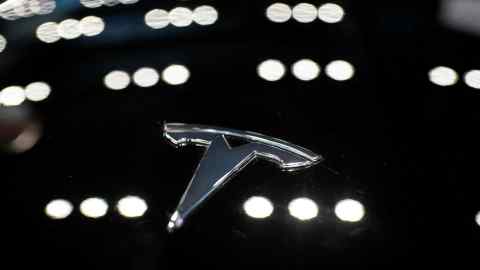 He explained that efforts to introduce vehicles would cause total output to decline and the focus in 2022 would be on scaling up operations.

When asked about the potential for a Tesla at a price of $25,000, Musk demurred. “We’re not currently working on a $25,000 car,” he said. “At some point . . . but it’s the wrong question. What overwhelmingly matters is, when is the car autonomous?”

Despite recent supply chain headwinds, the company called 2021 a “breakthrough year”, adding that its operating margin of 14.7 per cent was better than all volume carmakers, “demonstrating that [electric vehicles] can be more profitable than combustion engine vehicles”.

Shares of the company, now headquartered in Austin, Texas after a move from California, had slipped 22 per cent this year before Wednesday’s results were released, pulling its market capitalisation down to $934bn.