Ayatollah Ruhollah Khomeini once said the purpose of the 1979 revolution in Iran was to promote Islam, not the economy. Focusing on the latter would reduce human beings to animals, according to the founder of the Islamic republic.

More than four decades later, the regime’s ideology and hostility to the US remain intact but the economy is very much at the forefront of leaders’ minds. New president Ebrahim Raisi has sought to assure Iranians that his priorities were tackling economic woes and boosting their welfare.

The solution has been adopting a “resistance economy” against sanctions imposed by Washington, which accuses Tehran of developing the atomic bomb and fomenting terror operations in the Middle East. Iran can foil hundreds of US punitive measures by focusing on its domestic market; curbing its reliance on imports; increasing exports of non-oil goods to neighbours; and selling more oil to China.

Iran’s leaders say the economy has started growing again as a result. Indeed, the Islamic republic has weathered some of the biggest economic and military threats in recent years, a resilience partly reflected in the World Bank’s latest report.

After a two-year contraction, Iran’s gross domestic product grew by 6.2 per cent year on year in the period from March to May, the first quarter of the country’s 2021-22 fiscal year. This was thanks to expansion in oil and services sectors and less stringent Covid-19 restrictions. 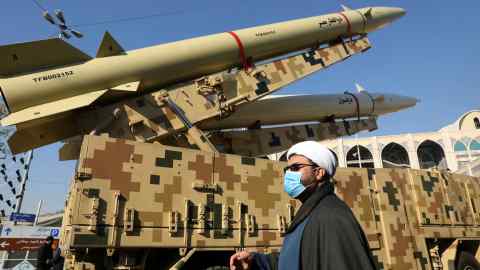 Meanwhile, oil production — Iran’s lifeline — is rising: it reached 2.4 mbpd in January-November 2021, although it is still behind the pre-sanction level of 3.8 mbpd in 2017, the bank said.

The positive developments have emboldened Tehran at a time when its diplomats are negotiating with world powers in Vienna to resurrect the 2015 nuclear deal, from which the US under Donald Trump withdrew in 2018. Iran promises it will roll back its huge nuclear advances only if the US lifts all sanctions first and guarantees no other US leader would abandon the deal. Economic resistance would continue if not.

Hardliners in Tehran, who control the Islamic republic’s most powerful bodies, shrug off warnings at home that such a stance could dearly cost the country as well as the regime in the long run.

The World Bank report noted that GDP growth was “from a low base”. It said real GDP in the previous financial year ended in March 2021 stood at the same level as a decade ago “while the country forewent the demographic window of opportunity (a highly educated young population)”. The latest economic rebound “only marginally reduced” the income gap with economies in the Gulf, the report noted.

Written by FT trade specialist Alan Beattie and delivered to your inbox on Mondays, Trade Secrets is the FT’s must-read briefing on the changing face of international trade and globalisation. Sign up here

In Iran, patience is running thin. Iranians say numbers are meaningless when their purchasing power is being eaten away with 43.4 per cent inflation (even though it has started going down). Inflation coupled with high unemployment and fluctuations in the currency and capital markets is fuelling pessimism.

The government’s plans to further cut subsidies on basic commodities and medicine have heightened inflationary fears. Masoud Mir-Kazemi, Iran’s vice-president for budget affairs, said Iran could at most earn a net income of $16bn in petrodollars next financial year, just enough to import basic commodities and pay civil servants. “We are under sanctions and it’s impossible” not to slash subsidies, he said last week.

But for a regime that came to power through street protests, fears of history repeating itself, this time against the Islamic republic, are never far away. Demonstrations are no longer sparked by the educated middle class to demand more social and political freedoms. Recent protests have been mostly over economic woes, whether caused by the government or by a severe drought.

Mehdi Asgari, a member of parliament opposing a cut in subsidies, said last week that more than 10m families struggled with poverty “and millions more [were] heading” in that direction. “They no longer can afford meat and rice and now you want to take away their bread and cheese, too?”