The first trading week of 2022 went with a bang in financial markets, and sent a clear message that this year will not be for the faint-hearted.

In fairness, investors and analysts knew it was likely to be lively. The US Federal Reserve — the markets’ firefighter-in-chief — had made clear that it was winding down its Covid-era stimulus in the face of bubbling inflation. At its policy-setting meeting in December, it had already bumped up the pace at which it will reduce asset purchases in what has become known as its “hawkish pivot”.

Casting ahead into this year, it does not take a markets savant to figure out that the full withdrawal of support and the introduction of US interest-rate rises (remember them?) will present a challenging environment for risky assets pumped higher by the Fed’s economic largesse. In layman’s terms: what goes up must come down. So, fund managers were prepared for volatility. Even if we end up higher in major stocks indices by the time the year is out, setbacks are inevitable.

Nonetheless, the release this week of the minutes of the last Fed meeting left a mark.

“The minutes are usually uneventful, but certain statements suggest that the Fed is willing to hike rates sooner and faster than what investors were assuming,” said Solita Marcelli, chief investment officer for the Americas at UBS Global Wealth Management, acknowledging that she, along with plenty of other investors, had been caught somewhat off guard.

In combination with signs that the Fed is looking at the details of how to cut back its $9tn balance sheet, Wednesday’s minutes prompted traders to amp up bets on a rate rise as soon as March.

“Much to the surprise of the market, [rate setters] seem to agree that the balance sheet needs to be reduced even faster than in 2018, an episode often seen as a policy mistake,” said Markus Allenspach, head of fixed income research at Julius Baer.

First against the wall, predictably enough, were highly speculative tech stocks. Or, as Hani Redha, a portfolio manager at PineBridge Investments, put it: “Spec-tech is getting wrecked.” An early contender for markets quote of the year, there.

The tech-heavy Nasdaq Composite index closed more than 3 per cent lower on Wednesday in its worst performance in almost a year. Cathie Wood’s flagship exchange traded fund, famed for its bets on often unproven technology companies that do not yet turn a profit, continued its miserable run, leaving it down almost 10 per cent just this year. Crypto, the planet’s most speculative bet, also suffered, with bitcoin down nearly 10 per cent at $41,450 a pop. Aside from a weekend flash crash in early December, that is the lowest since October.

Government bond prices have also taken a knock. Yields on benchmark 10-year US government bonds ended 2021 at just 1.5 per cent, well below most predictions. But they have swept up to about 1.75 per cent. This inevitably dulls the comparative allure of long-term speculative investments. 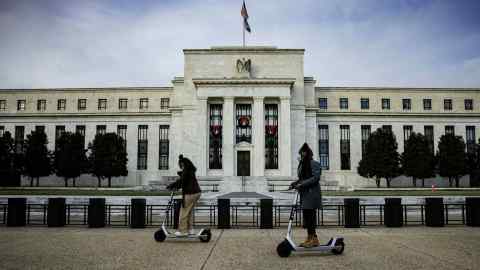 It all sets the scene for a tense tug of war between the Fed and fund managers this year. Mark Dowding, chief investment officer at BlueBay Asset Management, notes that in this process, the Fed’s messaging is tightly choreographed.

“Last year, the Fed wanted to move quite cautiously away from being ultra-accommodative to more neutral. They didn’t want to upset markets, and wanted to tread ever so carefully,” he said. “But lately it has been taking baby steps to see if the market will throw its toys out of the pram.”

After the last Fed decision, one of the central bank’s governors, Christopher Waller, firmly planted the notion that rate rises start in March to tackle “alarmingly high inflation”. Toy check: still in the pram.

Then at the very start of 2022, right before the minutes were released and with stocks indices still close to record highs, The Wall Street Journal gave some tasters on policymakers’ thinking, reporting that officials are “beginning to map out how and when” to shrink the central bank’s balance sheet. Again, toys remained in place.

“It turns out that markets are comfortable with three hikes this year, and three the following year, which still only takes us to 1.5 per cent by the end of 2023,” said Dowding.

Some of the froth has been blown aside, for sure. But a sub-2 per cent drop in the US’s benchmark S&P 500 stocks index on the week is hardly enough to spark soul-searching at the Fed over some terrible error. Crucially, too, the declines we have seen are from extremely elevated levels.

The Fed is still likely to consider pulling back if fund managers really start bawling. As Marcelli at UBS has suggested, the game remains the same: stick to cyclical bets. “Growth companies had been the main beneficiaries of extraordinarily low real and nominal interest rates,” she wrote. “As the Fed begins to normalise policy, it’s logical that these stocks will face the strongest headwinds. Within the US equity market we continue to have a preference for value stocks over growth stocks.”

Growth stocks fanatics who have not figured this out yet will have to learn to cry it out.