Operating profit for the world’s biggest producer of computer chips and smartphones was projected at Won13.8tn ($11.5bn) in the quarter ended December, but lower than the Won15.2tn forecast by a Refinitiv, partly because of special bonuses to employees. Sales were estimated at Won76tn, up 23.5 per cent from a year earlier.

The South Korean company’s earnings are likely to increase further this year after a bottom in the first quarter, analysts said. Chip prices are expected to rebound in the second quarter, partly thanks to reduced production at Samsung’s plant in Xi’an, China, which is under a Covid-19 lockdown.

“Chip prices are likely to fall less than expected in the first quarter and will start rebounding in the second quarter due to reduced supply from the Xi’an plant,” said CW Chung, head of research at Nomura in Seoul.

Expectations of a chip price recovery after a brief downturn have pushed Samsung shares more than 10 per cent higher in recent months, as demand for data centres and streaming services jumped with the resurgence of Covid outbreaks worldwide. Samsung shares rose 1.8 per cent on Friday morning. 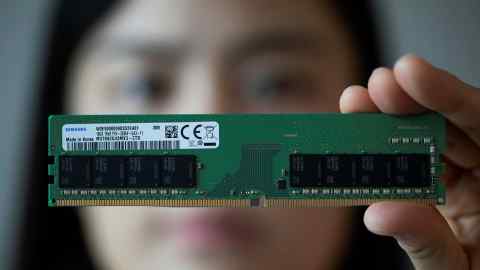 Samsung, which competes with contract chipmaker Taiwan Semiconductor Manufacturing Co, has also benefited from an increase in orders for its foundry business, which makes semiconductors for third parties. But the global non-memory chip crunch that has affected everything from cars to consumer electronics has eased more slowly.

Analysts said Samsung had won two years’ worth of foundry orders until 2023 and estimated that the division’s operating margin reached 10-20 per cent. The company is also planning to invest $17bn in a new US plant for contract chip manufacturing.

“External risks such as the resurgence of Covid-19 and the shortage of components still linger but the worst seems over,” said Park Sung-soon, an analyst at Cape Investment & Securities, in a recent report. “The company is likely to see a continued increase in foundry orders from major customers this year.”

Analysts said the lockdown in Xi’an was improving the price environment for both Dram and Nand flash memory chips, prompting suppliers to delay negotiations in anticipation of higher prices. Dram chips enable short-term storage for graphic, mobile and server chips, while Nand flash chips allow for files and data to be stored without power.

Samsung has two production lines in Xi’an, which account for 42.5 per cent of its total Nand flash memory production, according to TrendForce.

Analysts also expect Samsung’s mobile earnings to increase on easing component shortages. The company’s foldable phone sales are likely to double or triple to 15m-20m units this year, as it expects to ship more than 300m smartphones, up about 10 per cent from last year.

Your crucial guide to the billions being made and lost in the world of Asia Tech. A curated menu of exclusive news, crisp analysis, smart data and the latest tech buzz from the FT and Nikkei