Latin America has a history of high inflation and the region’s independent central banks have been among the world’s most aggressive in increasing interest rates. Brazil last week pushed up rates to 10.75 per cent after inflation ended 2021 in double digits, while Mexico, Peru and Colombia have also recently tightened policy sharply.

Chile’s government pumped $27bn of extra spending into the economy last year to counteract the impact of Covid-19, one of the developing world’s most generous stimulus packages. At the same time, congress allowed savers to withdraw pension savings early. The combined effect of the measures triggered a consumer boom, with economic growth surging 11.9 per cent last year and prices rising sharply.

Prices in Chile increased 1.2 per cent from the previous month in January, the largest one-month jump since 1990, and the annual rate hit 7.7 per cent. This came despite Chile’s central bank raising interest rates by a total of 500 basis points since last July. Some analysts now expect the central bank to continue tightening policy until rates reach 7.5 per cent, from the current 5.5 per cent.

Cerda, an economist appointed last year as conservative president Sebastián Piñera’s third finance minister, said it was “quite possible” that Chile’s economy would grow by 4 per cent in 2022. This is more optimistic than some analysts’ forecasts — Oxford Economics projects a growth of 2.2 per cent. But Cerda pointed to high levels of household savings and a planned increase of $10bn-$15bn in public investment.

However, he warned that for the growth to materialise, “good signals of public policy” were needed from the government, congress and a special assembly currently writing a new constitution.

Gabriel Boric, a 35-year-old former radical student leader, will be sworn in next month as Chile’s new president. His pledges to raise taxes, scrap the private pension system and increase the role of the state in the economy have alarmed investors.

Market jitters increased last week after committees in the left-leaning constituent assembly drafting the new constitution approved proposals to nationalise some of the world’s biggest copper and lithium mines and restrict water rights granted to mining companies and farms. The measures require approval by the full assembly and may be modified. 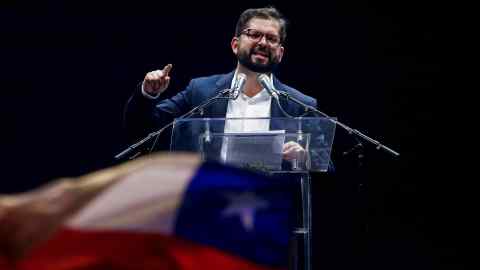 Asked whether Chile was about to abandon 30 years of pro-business economic policies, Cerda said the first declarations of the president-elect and his future finance minister pointed to “quite a lot more gradualism in policy”. Boric last month named the respected central bank president Mario Marcel as his finance minister.

Cerda nonetheless expressed concern that Chile could lose its hard-won position as Latin America’s most competitive and open major economy as the country boosts public spending to accommodate the demands of protesters who staged weeks of mass demonstrations from October 2019.

“I understand that today Chileans want some more speed in satisfying their social needs . . . but for this, economic growth is fundamental and we can’t lose sight of the fact that we need to keep growing, and growing fast,” he said.

“I’m not saying that we must have only one model of economic growth. What I’m saying is that we need a model which allows us to grow . . . rapidly.”