Pakistan’s government has sought to defuse tensions linked to one of China’s showcase Belt and Road investments in the country, striking a deal with protesters who for weeks have demonstrated in the port city of Gwadar.

For the past month, fishermen and other residents of Gwadar, located in the south-western province of Balochistan, have protested in frustration that promised prosperity from the controversial Chinese-built port and other projects has failed to materialise.

Locals complain that fishing trawlers encroach on their waters and that authorities have facilitated billions of dollars worth of Chinese infrastructure investment while neglecting basic services, such as education and drinking water supply.

The backlash attracted the attention of Prime Minister Imran Khan, who wrote last week that he had “taken notice of the very legitimate demands of the hardworking fishermen of Gwadar” and would clamp down on illegal fishing. Pakistan and China are investing about $500m in the port.

The government said on Thursday that it would ban fishing by outside trawlers to protect local fishing rights, as well as expedite projects to improve access to clean drinking water and bolster other public services for local residents, as it sought to bring the protests to an end.

The peaceful demonstrations exposed the persistent tension lingering over Chinese mega-projects in a highly sensitive region of Pakistan. Balochistan is home to a long-running insurgency by separatists who believe the area, one of the poorest in the country, is being exploited by the state for resources including gas and minerals.

The region’s problems also expose the difficulties facing Chinese president Xi Jinping in implementing the Belt and Road Initiative, an ambitious $1tn project that seeks to build bridges, ports and roads through some of the world’s poorest countries. 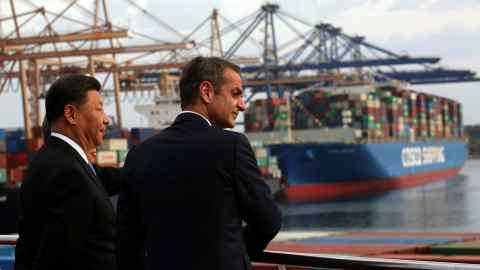 “The grievances of the local population were there for long. There is no employment for local people, drinking water is an issue and security is an issue,” said Ayaz Amir, a former member of Pakistan’s parliament.

Chinese nationals and projects have been targeted in Balochistan and elsewhere in Pakistan, most recently in a July attack that killed 13 people — including nine Chinese — in a neighbouring province.

“Chinese have been looking at [Gwadar] with deep interest and caution as well. If the Pakistani government is not able to manage it, then they will reconsider that interest,” said Bilal Gilani, executive director of Gallup Pakistan.

“In some sense, it’s a protest that’s acceptable to the federal government, which is battling a similar resistance in a more militant fashion,” he added. “They would rather grievances be channelled through this platform rather than a more militant platform.”

Located near Pakistan’s western border with Iran, Gwadar is the southernmost entry point to the $60bn China-Pakistan Economic Corridor. CPEC is a centrepiece of Xi’s Belt and Road programme.

China plans to link its western Xinjiang province to Gwadar, providing a vital strategic access point to the Arabian Sea and Gulf through a network of highways and energy pipelines.

Government officials acknowledged that the protests exposed gaps in the planning and development of CPEC.

“We have never seen a similar protest in the past in Gwadar,” said Ali Shah, a prominent TV journalist in Quetta, the capital of Balochistan. The protests are “a lesson which must be remembered and the demands of the population ought to be met before this happens again”.