A total of 170 jobs are to be created in Northern Ireland by one of the world’s biggest packaging companies, the latest business seeking to exploit the region’s “best of both worlds” post-Brexit trading status.

Ardagh Metal Packaging on Friday announced plans to build a $200m beverage can plant near Belfast, from which drinks will be exported both to Britain and EU markets.

The investment is one of the largest greenfield projects in the region since Brexit took effect and will be seen as a vote of confidence in the controversial Northern Ireland protocol.

The 2019 protocol gives Northern Ireland free access to the wider UK market, while leaving it within the EU’s single market for goods. The region is the only place in Europe with free access to both markets.

Although the arrangement is widely supported by businesses in the region, the British government is threatening to suspend parts of the protocol as talks with the EU continue.

Lord David Frost, UK Brexit minister, has claimed the deal imposes excessive checks on goods moved from Great Britain across the Irish Sea to Northern Ireland and has threatened to activate the Article 16 override mechanism in the treaty. Talks with the EU continued in Brussels on Friday.

Luxembourg-based Ardagh, which has origins in glassmaking in Dublin, said its “state of the art” plant would service “the growing needs of AMP’s beverage customers in Ireland, the UK and Europe”.

Relatively low labour costs in the region were another factor in the company’s choice of location. People close to the deal said the factory would create 170 high quality jobs, including technicians and engineers.

Oliver Graham, chief executive of AMP, said: “We are delighted to be investing in Northern Ireland, supporting our clients’ sustainability needs and further reducing our carbon footprint by locating closer to our end customers.” Its customers include Coca-Cola, which has a plant in Lisburn.

Last year Michael Gove, secretary of state for levelling up, said businesses in Northern Ireland would get “the best of both worlds” under the protocol, and many employers want the Brexit arrangement to continue.

Ardagh’s investment came days after Northern Irish pharmaceuticals group, Almac, announced it was creating 1,000 jobs in the region over the next three years as part of a global expansion.

Almac, which develops and manufactures pharmaceuticals and is based in Craigavon, sang the praises of the protocol, telling its customers the post-Brexit deal offered “unique, unfettered and flexible access to the UK, Europe and beyond”.

Not all businesses were as effusive about the protocol being a win-win for Northern Irish companies, with many filled with dread at the prospect of yet more disruption and uncertainty if Article 16 was triggered.

“Our exporters are having the time of their lives at the moment,” said Stephen Kelly, chief executive of Manufacturing NI, a lobby group.

That is borne out by booming cross-border trade. Ireland’s imports from Northern Ireland leapt 60 per cent in the first nine months of this year, compared with the same period last year, according to official Irish statistics.

“[Businesses are] concerned the uncertainty created around triggering Article 16 would be viewed as real [legal] jeopardy,” Kelly added. “The minute it’s done, Northern Ireland will be viewed as legally challenging and boardrooms and customer orders will begin to be impacted that very same day, that’s just the reality of it.” 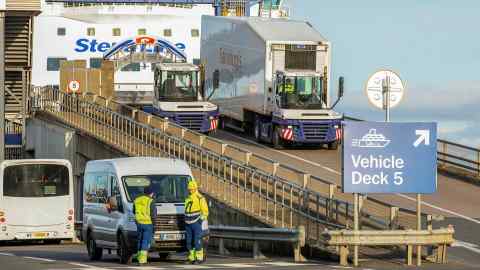 One business leader, who asked not to be named, said: “Triggering Article 16 would create another uncertainty lasting another 12 months if not longer, just as we’re entering the Christmas period.”

He said one manufacturing company, which did not want to be identified, had planned to move some operations from Ireland into Northern Ireland in order to benefit from both jurisdictions, but had put the plans on ice while they “wait and see” how UK-EU talks go.

“We’re not happy at all to be back to this Brexit stuff,” said Damian McGenity, a part-time beef farmer and spokesman for the Border Communities Against Brexit group, which is organising protests at five points along the border on November 20.

“Order books are full, businesses are recovering well [from Covid-19]. This is the last thing we need,” said McGenity. “Most business people want to get on with business.”