Christine Lagarde rebuffed investor expectations that the European Central Bank could raise rates next year to quell fast-rising prices, even as she acknowledged that its latest governing council meeting was dominated by a discussion of “inflation, inflation, inflation”.

The ECB president said the council had done “a lot of soul-searching” to test its assumption that inflation would fade next year, and its analysis did “not support” market expectations for a rate rise before the end of 2022.

Nevertheless, even as Lagarde spoke on Thursday, investors ramped up their bets of an ECB rate rise. Markets are currently pricing in a 0.1 percentage point rise by September next year.

“The view in the market is that central banks are behind the curve,” said ING rates strategist Antoine Bouvet. “The ECB is no exception.”

Instead, after a two-day meeting of its governing council, the ECB said its €1.85tn pandemic emergency purchase programme (PEPP) would continue, although at “a moderately lower pace” than the €80bn-a-month level it ran at until last month. The ECB also kept its deposit rate unchanged at minus 0.5 per cent.

The ECB president dismissed fears of “stagflation” and said the euro area economy was still recovering strongly, even if it had lost momentum recently due to the supply chain problems and the surge in energy prices. She said: “We foresee inflation rising further in the near term but then declining in the course of next year.”

However, in a subtle shift from previous statements, Lagarde said inflation would “take longer to decline than originally expected”, adding that supply chain bottlenecks were likely to last well into next year, although she expressed confidence it would fall below the ECB’s 2 per cent target by 2023.

Economists expect eurozone inflation to rise to 3.7 per cent this month, its highest level since 2008. Some are also starting to predict it could remain above the ECB’s target next year.

Neville Hill, chief European economist at Credit Suisse, said the ECB president had been “only half convincing in pushing back on the market’s pricing of higher rates next year”.

Underlining how inflationary pressures are rising in Europe, the selling price expectations of EU companies rose to a record high in October, according to the European Commission’s latest monthly survey, while consumer price expectations rose to their highest level since November 1992.

The ECB agreed a new strategy earlier this year designed to avoid the risk of raising rates too soon — something it was widely considered to have done just as the eurozone debt crisis was starting in 2011 and it hiked rates twice during a food and energy supply shock. 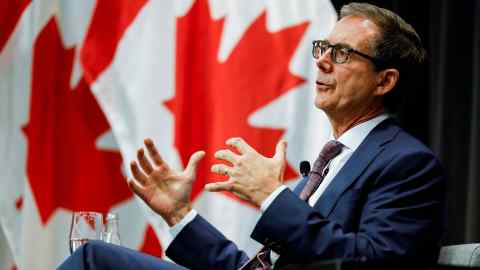 Some central banks have acted forcefully in the face of rising inflation. On Wednesday, the Bank of Canada jolted markets by saying it would stop asset purchases and raise rates sooner than expected. Brazil’s central bank also raised rates by 175 basis points, its biggest move in almost 20 years.

“The danger for central banks is that inflation expectations could become unanchored,” said Randall Kroszner, a professor at the University of Chicago business school and a former Fed governor. “The ECB seems prepared to be more patient.”

Lagarde said she expected PEPP to end in March, adding that the decision on whether to expand an earlier asset purchase programme to offset some of the reduction would not be made until December.

The €1.41tn already spent under PEPP since it was launched in response to the Covid-19 crisis last year has taken the ECB’s overall portfolio of assets to €4.5tn and allowed it to exceed a self-imposed limit to own no more than a third of any country’s eligible sovereign debt.

There are expected to be divisions on the ECB council over how much of that flexibility to preserve under the continuing asset purchase programme, which is expected to be increased from its current pace of €20bn a month.

When Jens Weidmann said last week that he would quit as head of Germany’s central bank at the end of the year, he warned in a letter to Bundesbank staff: “Crisis measures, with their extraordinary flexibility, are only proportionate in the emergency situation for which they were created.”