The Federal Reserve’s announcement on Wednesday that it would begin unwinding its $120bn-a-month stimulus programme marked one of the most significant moments in the US central bank’s response to the global pandemic.

Yet the milestone barely registered with financial markets: in the immediate aftermath of the decision, short-dated US government yields inched up only marginally and the S&P 500 stock index extended its steady climb.

The muted reaction reflected not just the Fed’s painstaking six-month effort to prepare investors for the “taper” of its massive stimulus, but also chair Jay Powell’s insistence that it is still far too early to think about raising US interest rates despite widespread inflation.

“It’s appropriate to be patient,” Powell said during a press conference following the Fed’s two-day meeting, at which the central bank said it would scale back its bond-buying programme by $15bn each month — a timeline that puts it on track to withdraw the stimulus entirely by the middle of next year.

Powell’s refusal to even countenance a discussion of when rates should go up helped to calm investor nerves, which had intensified in recent days as the spectre of an early rise weighed on markets.

“The Fed was sufficiently dovish, which markets always like,” said Kristina Hooper, chief global market strategist at Invesco. “No one in the market was surprised today.”

Rather than respond directly to market expectations — which point to at least two interest rate increases in 2022, with the first arriving as early as the third quarter — Powell called for forbearance. He pointed not only to the huge uncertainty that still clouds the economic outlook, but also the considerable ground that still needs to be made up to repair the labour market.

“We had the question on when to taper. We have now answered that question and the speed of it,” he said. But when it came to the matter of “lift off” for rate rises, Powell said the central bank was keeping its powder dry because it had not yet met the tests for the next step of monetary tightening.

The Fed has stipulated that it will maintain interest rates at today’s near-zero levels until it achieves maximum employment and inflation that averages 2 per cent over time.

Those thresholds are far more stringent than the tapering hurdle, which only required “substantial further progress” towards the Fed’s goals.

Surging inflation, driven by supply-chain bottlenecks and pandemic-related disruptions, has heaped pressure on the Fed to contemplate a more swift move towards tighter monetary policy to counteract the persistent price pressures.

But Powell on Wednesday showed little appetite to sacrifice the Fed’s employment goals in a bid to curb inflation that the central bank still expects to fade over time.

That said, the Fed did change its tune to a certain degree on the gravity of inflation risks in the US, acknowledging that price pressures have outpaced expectations and are likely to endure for longer due to worsening supply chain bottlenecks.

Yet Powell stood firm in his belief that the hotter economic environment does not warrant a lurch towards a rapid tightening of monetary policy right now.

Powell said the Fed was cognisant of the “difficulties that high inflation poses for individuals and families” but insisted the central bank did not have the necessary tools to tackle supply chain problems.

Rather, he said the Fed shared the view of some economists who believe America’s “dynamic economy will adjust to the supply and demand imbalances” eventually, and that inflation will then ease to levels near its 2 per cent goal. 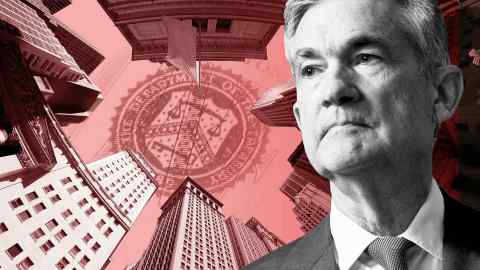 Still, Powell balanced his dovish signals with assurances that the Fed was “watching carefully” to ensure the US economy evolved as it expected, pledging the central bank would “not hesitate” to act if inflation becomes more entrenched.

Jeffrey Sherman, deputy chief investment officer at DoubleLine Capital, said: “Powell’s key message was that the Fed is not on automatic pilot.”

Perhaps more importantly, Powell bought himself some extra time as the Fed embarks on its latest attempt to nudge monetary policy back towards something approaching normality, said Ethan Harris, head of global economics research at Bank of America.

“They really aren’t sure what to make of the recent acceleration in inflation, and they want to gather more data,” said Harris, who nonetheless worries that the Fed is leaving itself vulnerable to the risk of a much more serious bout of price pressures.

For one former Fed staffer, however, Powell’s wait-and-see approach is the right one.

He added: “They are doing the right thing.”