The EU could abandon the entire Brexit agreement with the UK if London goes through with its threat to suspend parts of the withdrawal deal, Ireland’s foreign minister has warned.

In some of the strongest public comments to date, which suggested a full blown trade war was coming closer, Simon Coveney told broadcaster RTE that the UK was deliberately pushing for a deal it knew it could not get.

Retaliatory action from Brussels would go hand-in-hand with any action from London, he said. “One is contingent on the other. So that if one is being set aside, there is a danger that the other will also be set aside by the EU.”

That raises the spectre of a breakdown in relations between London and Brussels.

The UK government has said for weeks that the conditions are there for it to suspend parts of the Brexit deal because of deep differences over how to make post-Brexit trade rules work for Northern Ireland.

The region was left inside the EU’s customs union and single market, despite Britain’s exit, under the so-called Northern Ireland protocol of the Brexit deal. That was in order to avoid a land border on the island of Ireland and the need to protect a 1998 peace deal that ended three decades of sectarian strife. 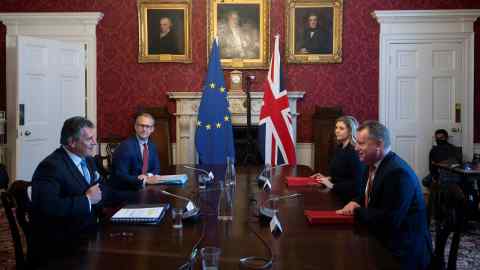 London has dismissed concessions from Brussels made last month that would simplify Irish Sea customs checks, saying they do not go far enough, and is refusing to accept oversight of the deal from the EU’s top court.

UK Brexit negotiator Lord David Frost and Maros Sefcovic, EU vice-president and Brexit point man, have held talks and were due to meet again on November 12 in London. But while Brussels says it has been more than flexible, the UK says it has not gone far enough.

Expectations that London will trigger Article 16 of the withdrawal agreement — effectively putting the deal or parts of it on hold — have mounted and a move is widely seen as likely in the coming days.

Coveney said that would be seen by the EU as “deliberately forcing a breakdown in relations and negotiations between the two sides”.

The EU increasingly believes London is seeking to collapse negotiations in a bid to get the EU to rewrite the protocol — something Brussels has refused to do. This could bounce the EU eventually into saying “enough, we are not negotiating with a partner here that is acting in good faith,” he said.

“I think they are deliberately asking for what they know they can’t get,” he said, adding London offered nothing but continued to ask for more.

“It would be irresponsible, unwise and it would be reckless to invoke Article 16. If such an act was to be taken by the British government, I think it would have far reaching implications for the relationship between the United Kingdom and the European Union,” he said.