Imran Khan’s government is set to present Pakistan’s parliament with a series of unpopular austerity measures in an effort to resume a stalled $6bn IMF loan programme, risking a fierce political backlash at a time of deep economic pain.

A finance bill is expected to be introduced to the lower house on Wednesday that would cut development spending, end subsidies for areas including electricity and gas and remove sales tax concessions on raw materials and pharmaceuticals.

The push ahead with belt-tightening follows a deal between the IMF and Pakistani officials last month to restart payments of a financial support package that was agreed in 2019. The measures are necessary to secure the next instalment of $1bn after the loan programme stalled this year.

Pakistan’s economy has been mired in a difficult economic cycle, with inflation at its highest level in years and the rupee plummeting 17 per cent against the US dollar since May. A weekly index of everyday essentials such as food and fuel soared almost 20 per cent last week compared with the same period last year.

The State Bank of Pakistan has responded by raising the benchmark interest rate twice since last month by a total of 250 basis points, to 9.75 per cent.

The bill is expected to pass parliament but the unpopularity of the austerity measures has added to the mounting political challenges facing Khan. Critics said cutting sales tax concessions would disproportionately hurt the poorest, who have borne the brunt of soaring inflation, while opposition parties plan to hold street protests against the government next year.

Khan hopes to be one of Pakistan’s few elected leaders to finish out his term, which is due to end in 2023.

The prime minister came to power vowing to end the boom-and-bust cycles that have forced Pakistan to seek 12 IMF bailouts since the 1980s. Yet concerns about a spiralling balance of payments crisis forced him to accept the fund’s unpopular terms.

Growth in Pakistan has remained relatively robust, with Fitch Ratings expecting it to hit about 4 per cent this year. But analysts said these measures could make life more difficult. “The IMF is saying you need to put in measures to slow down the economy,” said Sakib Sherani, chief executive of Macro Economic Insights, a research company in Islamabad.

Shaukat Tarin, Pakistan’s finance minister, argued that the existing concessions and subsidies were distorting the economy. “The IMF is not saying that you don’t give relief to people,” he told reporters. “But they’re saying don’t distort the tax ratio.” 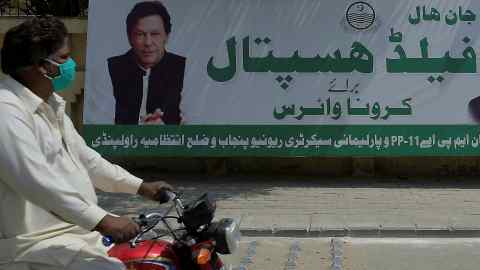 But Shahid Khaqan Abbasi, a former prime minister and prominent opposition leader, said the reforms were being rushed through parliament. Since Khan became the prime minister in 2018, he added, the price of essential daily items had risen as much as 50 per cent.

“The reality is that the government has not met the IMF’s conditions and they are seeking to fill the gap. The common citizen will be hit very hard,” he said. “There are serious escalations like [the tariff for] gas and electricity.”

Khan’s government will introduce a separate bill to give more autonomy to the State Bank of Pakistan, something the IMF has also sought. The bill will protect the central bank’s governor from being removed by the government and restrict government borrowing.

But critics of the bill have argued that the measures will make the central bank unaccountable, with one prominent business leader quipping that its governor would effectively become “Pakistan’s first economic viceroy”.