The furore over whether IMF managing director Kristalina Georgieva manipulated data to favour China in her previous role at the World Bank nearly cost the Bulgarian economist her job.

Whatever the truth of the allegations, no one doubts China’s determination to make its mark on the multilateral institutions that underpin the global financial system.

“China wants a bigger voice and more chairs at the table,” said Yu Jie, senior China research fellow at Chatham House. “It wants to brand itself as the leader of the global south.”

China’s geopolitical ambitions have stepped up in recent months, from outlawing trading in cryptocurrencies while simultaneously promoting the digital renminbi, to trade measures that target countries with which it disagrees. These included closing its doors to Lithuanian exports this month after the Baltic state allowed a Taiwanese representative office to open in Vilnius.

Just as important are China’s financial and diplomatic ambitions at the UN and Washington-based institutions such as the IMF and World Bank, which lie at the heart of the global system designed by western countries after the second world war.

Distinctively, China pursues its ambitions by using its unusual dual status as both a developing economy and a superpower.

“There really isn’t a precedent for what we’re seeing with China,” said Scott Morris of the Center for Global Development, a Washington-based think-tank. “China is uniquely important at these institutions, especially at the World Bank . . . as a shareholder, as a donor and as a client.”

Its ambitious Belt and Road Initiative of overseas infrastructure investment has also been cut back and replaced by the milder sounding Global Development Initiative launched by President Xi Jinping at the UN General Assembly in September.

This is an example of China “playing two hands”, said Yu. With one, it seeks the endorsement of global institutions such as the UN to drive its agenda and gain support, especially among developing countries. The GDI “doesn’t even sound like a Chinese initiative”, Yu said.

Yet at the same time, when its global ambitions at the World Bank or elsewhere are thwarted, it quickly sets up alternatives such as the Shanghai-based New Development Bank and the Asian Infrastructure Investment Bank.

China’s frustrations are understandable. The G20’s prominent role during the 2009 financial crisis was a belated western acknowledgment that China and other major emerging economies deserved a greater say in global governance. Yet little has changed at the IMF or World Bank since.

Despite accounting for almost a fifth of the world economy, China’s shareholding at both institutions is only about 6 per cent, smaller than Japan’s and barely a third of that of the US. Efforts to reform the IMF’s quota system have been stymied by those, including European countries, who would lose out.

As for the World Bank, a formula it devised after the financial crisis would have doubled China’s shareholding to 12 per cent. But by the time that proposal was considered, during Donald Trump’s administration, Sino-US relations had soured and China’s ambitions were put on hold after the plan was kicked down the road for later consideration.

“If you are the US, do you want to deeply upset [allies] in order to please China?” asked Morris. “It’s hard to read the landscape and conclude the US is going to do that.”

Such tensions came to a head during the World Bank’s 2018 capital increase. That was when Georgieva, as its chief executive then, allegedly oversaw the manipulation of data in the bank’s flagship Doing Business report to flatter China’s ranking.

When the allegations emerged in September this year, Georgieva, who had since moved to the IMF to become its managing director, was accused of doing so to help persuade China to stump up more money. But as she noted in her defence, China had “unequivocally supported a capital increase for the Bank for many years”.

Rather, her critics say, she did so to placate Beijing after others disallowed any increase in its shareholding. 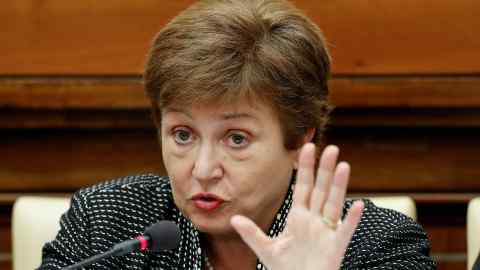 Georgieva has denied any wrongdoing and the IMF board, after reviewing the allegations, concluded there was insufficient evidence to show she played an improper role.

China has had greater success at the UN. Over the past 20 years, its contributions have risen from 1 per cent to 12 per cent as Beijing seeks to increase its influence, putting the country in second place. Meanwhile, US contributions have slipped from 25 to 22 per cent.

Chinese nationals now head four UN institutions, including the Food and Agriculture Organization and the International Telecommunication Union, on a par with the US.

Such influence comes at a comparatively low cost. “You have to give them credit for understanding that with relatively little money you can become an important player in the international setting,” said Augusto Lopez-Claros, executive director of the Global Governance Forum. “They have understood that better than the Americans.”

An examination by the CGD into China’s expanding role in multilateral institutions and other development banks showed that Beijing asserted itself wherever possible in those bodies. Yet, as China is still officially classified “a developing country”, it also drew on those institutions for financial and technical help.

“They haven’t backed off at all from their status as a developing country,” said CGD’s Morris. “That really is unique. If you think of India or the other big emerging economies, they borrow a lot but they don’t have the status of a global leader.”