For Vania Barbosa it is getting harder to afford the basics. The 40-year-old single mother from the outskirts of Brasília used to buy a kilo of minced beef or knuckle weekly, but has now switched to cheaper cuts just once a month.

“Each week you go for groceries there are different prices,” the restaurant worker said. “Sometimes I have to take out a piece of fruit, a mango, or remove the box of soap and not do the laundry until the following week.”

Her hardships reflect a malaise that is hitting the pockets of many people in Latin America’s most populous nation, after soaring costs for everything from petrol to meat pushed the rate of inflation into the double-digits for the first time in more than five years.

Faced with discontent over living standards as he prepares for a re-election campaign next year, president Jair Bolsonaro has insisted it is an issue around the world.

A rally in commodities such as crude oil and foodstuffs, as well as supply chain bottlenecks in the wake of coronavirus disruptions, have contributed to the global phenomenon.

“But another part of the cause is domestic,” said Caio Megale, chief economist at investment brokerage XP. “Our exchange rate has depreciated more than [many] other currencies, causing inflation to come with greater force.”

Since the beginning of 2020 the real has shed a quarter of its value against the dollar, and it is down 5 per cent so far this year.

Brazil’s consumer prices climbed in October, pushing inflation to 10.67 per cent annually, more than expected and the sharpest increase for that month since 2002. Among G20 nations, it ranks only below Turkey (20 per cent) and chronically-hit Argentina (52 per cent), according to OECD data.

Over the past 12 months, Brazilian shoppers have witnessed sharp rises in products ranging from refined sugar (48 per cent) and cooking gas (38 per cent) to airline tickets (50 per cent).

At the same time, the worst drought in almost a century has hit hydroelectricity generation and forced utilities to turn on costlier thermal plants, leading to jumps in power bills.

The effects are being felt more by people on lower incomes, and researchers say there has been a rise in hunger since the start of the pandemic.

While traffic has returned to the country’s biggest city with the lifting of Covid-19 restrictions, drivers say rises at fuel pumps have made certain rides less attractive, despite a recent increase to take-home fares by the platform.

“At times it’s not worth picking up the customer. You’re losing money — you’re paying to work,” said one driver, Sergio Pereira, who logs into the app on weekends.

With Bolsonaro trailing in opinion polls to former leftwing president Luiz Inácio Lula da Silva, who is expected to challenge him for the presidency in the October 2022 election, the government intends to boost a cash-transfer scheme for the poorest citizens.

But some observers worry these plans could end up exacerbating inflation, even as interest rate raises by the central bank to combat increases in prices drag on growth.

To pay for the expanded welfare programme, the administration wants to alter a constitutional spending cap that limits budget increases and is regarded by investors as a pillar of Brazil’s economic credibility. The draft legislation before Congress would also delay payment of certain judicial debts.

Critics view the manoeuvre as a worrying sign that fiscal rectitude may be abandoned. They argue it risks a negative spiral, putting more pressure on the currency which in turn pushes up the value of imports and goods priced in dollars.

Arminio Fraga, former central bank president, said while on their own the extra funds released “may not be the end of the world”, the package could lead to a perception among investors that “the floodgates have been opened and the government may default on a legal obligation”.

“It allows for bad scenarios to creep into the picture,” he added. “I think the kind of inflation we had in the 80s, even 70s, would be a surprise. But can we totally rule it out? I’m afraid not.”

For now, the country is a long way off the stratospheric hyperinflation of the past, which was tamed in the mid-1990s with a macroeconomic stabilisation plan that introduced a new currency.

Yet among some economists there is now talk of the possibility of “fiscal dominance”. This refers to when monetary policy turns less effective against inflation, or even counterproductive, as dearer borrowing costs elevate the burden of servicing government debts and amplify doubts around the public finances. 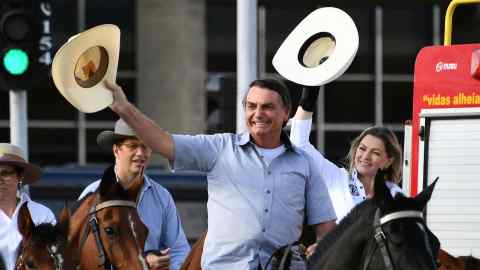 Brazil’s central bank has been one of the most hawkish in the face of inflation, raising the benchmark Selic interest rate six times this year, from an all-time low of 2 per cent to 7.75 per cent.

However, the dampening effect of higher rates on economic activity has contributed to downgrades to gross domestic product forecasts. The possibility of little to zero growth in 2022 is raising the spectre of stagflation.

Despite the gloom, the currency has regained some ground this month and there are hopes that a big source of price pressures will ease from May, when an emergency electricity tariff is due to expire.

“With a stronger stance from the central bank and a likely slowdown in the global economy, inflation will decline,” said Megale at XP.

“But the key point will remain with the public accounts. If we are not able to balance, inflationary pressures will become more and more persistent in the economy.”

Zeina Latif, an economic consultant, believes that Brazilians accustomed to moderate price rises will show their displeasure at the ballot box. Bolsonaro “messed with something he shouldn’t have”, she said.