The German economy shrank as much as 1 per cent in the final three months of last year, as the latest coronavirus restrictions and supply chain bottlenecks kept output below pre-pandemic levels.

The Federal Statistical Office on Friday published initial estimates showing Europe’s largest economy managed growth of 2.7 per cent last year, despite fourth-quarter output falling between 0.5 and 1 per cent from the previous quarter.

The figures mark a rebound from 2020, when German gross domestic product shrank 4.6 per cent in a record postwar recession caused by the Covid-19 crisis. But the country is lagging behind other big economies, including the US, France and UK, which have rebounded above pre-pandemic levels of output.

Georg Thiel, president of Destatis, the German statistics agency, said the country’s GDP remained 2 per cent below pre-pandemic levels. “Despite the ongoing pandemic situation and increasing supply and material bottlenecks, the German economy was able to recover after the slump in the previous year, although economic output has not yet reached the pre-crisis level.”

Germany’s vast manufacturing sector has been hamstrung for months by supply chain delays and shortages of materials such as semiconductors. Its larger services sector is also being hampered by new restrictions to contain a record surge in coronavirus infections.

“The final quarter of 2021 was probably weak given necessary restrictions in contact-intense services and production difficulties in manufacturing due to persistent supply bottlenecks,” the German finance ministry said in a statement.

Economists expect the German economy to rebound strongly later this year once coronavirus restrictions are lifted and supply bottlenecks ease. But they worry that if the problems persist, the country could slide into recession — defined as two consecutive quarters of falling GDP.

Carsten Brzeski, head of macro research at ING, said: “The annual numbers mask a contraction in the economy in the final quarter of 2021, emphasising the high risk for the economy to fall into an outright recession at the turn of the year.” 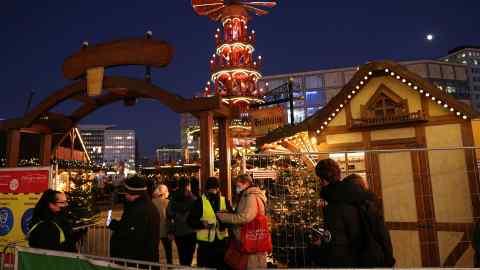 The Bundesbank last month cut its German growth forecasts but said it still expected the economy to rebound above pre-pandemic levels of GDP in the coming months with growth of 4.2 per cent in 2022, boosted by a “boom in private consumption”, as well as higher exports and business investment.

“From early summer onwards, we expect a strong economic recovery again with the seasonal waning of corona,” said Jörg Krämer, chief economist at Commerzbank. “This is also supported by the fact that manufacturing’s order books are fuller than at any time since statistics began in the early 1960s.”

Destatis said output in the country’s manufacturing sector last year remained 6 per cent below 2019 levels, while the shortfall in the sports, culture and entertainment sector was 9.9 per cent.

This was partly offset by a rebound in the public sector, which was boosted by increased government spending, as the country’s budget deficit increased slightly to €153.9bn last year, the second highest since the country’s reunification more than 30 years ago.