The Federal Reserve may need to raise interest rates “sooner or at a faster pace” than officials initially anticipated, as it seeks to tame uncomfortably high inflation and foster a stable economic recovery, according to minutes from its latest meeting.

Minutes from the December meeting of the Federal Open Market Committee released on Wednesday showed officials fully on board with plans to more swiftly scale back the asset purchase programme instituted at the onset of the pandemic, in order to give the central bank greater flexibility to raise interest rates next year.

The minutes provide additional detail on why the Fed pivoted sharply in late 2021 to embrace a more aggressive approach to withdrawing its accommodation from financial markets and how the central bank could proceed this year with various policy adjustments.

A sell-off in US stocks gathered pace after the minutes were released, with the S&P 500 1.2 per cent lower on the day and the technology-heavy Nasdaq Composite down over 2 per cent.

December’s meeting also featured the first substantive discussion about the Fed’s balance sheet, which has more than doubled in size since early 2020 and now hovers at just below $9tn.

The minutes suggest broad support for the Fed to begin reducing its balance sheet after the first interest rate increase. Some said a move could happen “relatively soon” afterwards.

“Some participants judged that a less accommodative future stance of policy would likely be warranted and that the committee should convey a strong commitment to address elevated inflation pressures,” the minutes said.

According to the so-called dot plot of individual interest rate projections published by the Fed following its December meeting, officials expect to raise interest rates three times next year, with another three moves pencilled in for 2023 and two more in 2024.

In September, Fed officials had been evenly split on the prospects of lifting the policy rate from today’s near-zero level this year.

Christopher Waller, a governor at the US central bank, later suggested the first rate rise could even come as early as March, as the stimulus programme ceases altogether.

According to the minutes, policymakers stressed the importance of staying flexible when it comes to future policy adjustments, especially given the speed of the economic recovery.

“Participants generally noted that, given their individual outlooks for the economy, the labour market, and inflation, it may become warranted to increase the federal funds rate sooner or at a faster pace than participants had earlier anticipated,” the minutes said.

Inflation has come in far stronger than Fed officials initially expected in the early days of the pandemic recovery. Recent prints have suggested a growing risk that elevated US consumer prices become entrenched.

The minutes highlight specific concern that the supply chain bottlenecks and labour shortages that have contributed to rising prices are likely to “last longer and be more widespread than initially thought”.

At the press conference following the December meeting, Jay Powell, the Fed chair, said the current inflation level was “not at all” what the Fed was looking for when it announced in August 2020 that it would tolerate higher inflation in order to make up for past periods of undershooting its longstanding 2 per cent target. 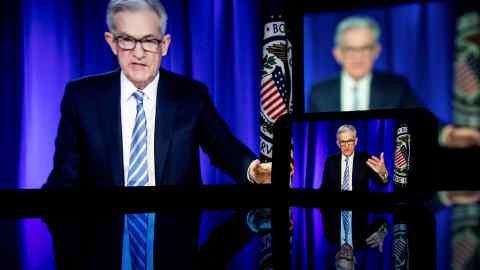 One of its favoured gauges, the personal consumption expenditures price index (PCE), registered a 5.7 per cent annual pace in November, the highest level in roughly four decades.

Fed officials have raised their inflation forecasts accordingly, with the core measure — which strips out volatile items like food and energy — now expected to have steadied at 4.4 per cent in 2021 before falling further to 2.7 per cent at the end of 2022. FOMC members and other regional branch presidents also lowered their targets for the unemployment rate, which currently stands at 4.2 per cent. By the end of 2022, it is expected to dip to 3.5 per cent.

The central bank has committed to keep interest rates near zero until it achieves inflation that averages 2 per cent over time and maximum employment.

Some participants even suggested the Fed could raise interest rates before maximum employment had been fully achieved, especially if inflationary pressures continue to mount.