The Federal Reserve is set to look past the turbulence that has gripped global financial markets in recent days and lay the groundwork for raising interest rates in March as it attempts to counter rampant inflation.

The Federal Open Market Committee is expected on Wednesday to keep its main policy rate at the rock-bottom level it has been at for nearly two years, while signalling its readiness to begin raising the rate more substantively in an attempt to cool down the US economy.

The central bank’s statement will be released on Wednesday at 2pm Eastern Time, followed by a press conference with Jay Powell, Fed chair, shortly afterwards.

The decision comes during a period of extreme volatility for financial markets. US stocks have whipsawed in recent days as investors face a more hawkish central bank.

In the weeks leading up to the January’s meeting, Fed officials have signalled their support for “lift-off” in March, citing underlying strength in the US labour market and inflation that is running at its fastest pace in roughly four decades.

The asset purchase programme, which was put in place to shore up the economy’s defences against the Covid-19 shock and avert a worse financial catastrophe, is also set to be wound down in March. 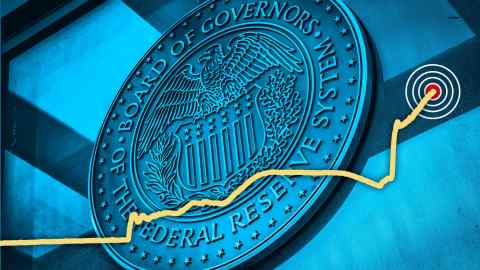 With the unemployment rate now below 4 per cent, many policymakers have concluded maximum employment has been achieved, fulfilling one of two goals laid out by the Fed before it said it would move to more significantly tighten monetary policy. The other — inflation that averages 2 per cent over time — was met last year.

Expectations have also since changed about the total number of interest rate increases this year, with many Fed officials and Wall Street economists suggesting a more aggressive path may be warranted than anticipated.

Some traders have even speculated that the Fed could raise rates by half a percentage point in March, but such a dramatic move does not appear likely.

The FOMC and other regional branch presidents just last month pencilled in three quarter-point increases in 2022, with three more in 2023 and another two in 2024. At the time, they forecast core inflation to moderate to 2.7 per cent by the end of the year from the current level of 4.7 per cent, and the unemployment rate to fall to 3.5 per cent.

If inflation does not ease, however, the speed at which the Fed scales back its support and moves its main policy rate closer to 2.5 per cent may accelerate.

That could translate to interest rate increases at each of the seven meetings after January, economists say, as the Fed seeks bolder steps to damp red-hot demand.

Debate is also under way about how the Fed will shrink its roughly $9tn balance sheet, after the first substantive discussion last month.

No decision has been made about how rapid the reduction will be or when it may begin, but officials appear to agree the process should proceed quicker than the attempt to pare it in 2017, when the balance sheet hovered at about $3.7tn.

That “run-off”, or the process of no longer reinvesting the proceeds of maturing Treasuries and agency mortgage-backed securities, began roughly two years after the first interest rate increase following the global financial crisis of 2007.

The 2017 episode ended in acute financial market stress — with short-term borrowing costs spiking as it became evident that too much cash had been drained from the financial system.

Economists broadly expect this round to begin in July, with some suggesting an earlier start.