The difference between the pace of growth in developing and advanced economies is set to narrow to its lowest level this century. For emerging markets seeking investors, that is a problem: the point of investing in a developing economy is that it offers markedly quicker growth than developed ones. Without that, the money will go elsewhere.

Emerging market assets traditionally have greater yields than those available in rich countries for two reasons. One is that their economies are growing faster. The other is that they are riskier.

The case for investing in emerging market stocks and bonds has rarely been weaker — something the IMF data on growth rates reinforces. The coronavirus pandemic is ongoing, often in places where vaccination rates are stubbornly low, and economies have been weighed down by debts incurred to help cope with its impact on public health and businesses.

Higher interest rates in the US and a stronger dollar are looming on the horizon, making those debts harder to service and defaults more likely. And across large parts of the developing world, inflation has risen alarmingly, forcing policymakers to raise interest rates aggressively to avoid a spiral into the hyperinflation that has plagued many of these countries in the past. When coupled with stuttering global trade it paints a gloomy picture.

The biggest immediate example of such risk is Sri Lanka. Stricken by the hit to its tourism sector during the pandemic, the country has almost $7bn in interest and debt payments due this year, but less than $3bn in foreign reserves.

Although the government believes it can weather the crisis as tourists return and exports pick up, it has also sought relief from creditors such as India and China, which has funded infrastructure projects such as the Hambantota port and Colombo Port City. Even so, many bondholders now see a default as inevitable.

Larger emerging economies appear to be in less immediate danger. But Ed Parker, head of global sovereign research at Fitch Ratings, a credit-rating agency, talks of “a long tail of weak, fragile frontier markets” that look to be at risk.

Investors are particularly concerned about countries such as Ghana, El Salvador and Tunisia — not to mention Ukraine, should Russia invade. “This is not an abstract concept,” warns Parker. “Given the pandemic, many of them are much less able to withstand the shocks that could hit them this year.” Six countries have already defaulted during the pandemic: Argentina, Belize, Ecuador, Lebanon, Suriname (twice) and Zambia.

Yet even while larger countries are not at immediate risk of default, many have suffered a deterioration in credit conditions. In 2020, Fitch issued a record 45 sovereign downgrades affecting 27 of the 80 emerging markets for which it prepares ratings, including Mexico and South Africa. It downgraded Turkey last week.

This is bad news, and not only for investors. The influx of foreign capital into emerging markets since the 1980s has contributed to a huge reduction in poverty levels and growth in middle classes globally. If it continues shrinking, the frontier countries with the most potential for growth will suffer as will their populations.

“Two years into the pandemic,” says Rebeca Grynspan, secretary-general of the United Nations Conference on Trade and Development, “the problems [of debt, inflation and slow growth] will only mount.”

Looking for the positives

The outlook is not wholly bleak, say analysts. Many emerging economies are much better placed today to withstand such difficulties than they were in the past. Previously, persistent and deep current account deficits made countries vulnerable to external shocks and dependent on foreign finance.

Now, in aggregate, emerging markets are running a current account surplus. Many, including Brazil, South Africa and India, have substantial reserves of foreign exchange and deep local capital markets, which offer protection from swings in exchange rates and in foreign investors’ appetite for risk.

For exporters of commodities and other goods, international prices have moved in their favour. Although big countries from India to Brazil have suffered terribly in the pandemic, many smaller countries, especially in sub-Saharan Africa, have coped far better with the public health and economic consequences of the crisis than first feared. So many foreign investors have retreated from emerging market stocks and bonds that there is little risk of a further sell-off, and prices have fallen low enough to tempt some back in. Some asset managers are even predicting a bumper year ahead — or at least a quiet comeback.

Fixed income investors also have reasons to be cheerful. While the world waits for the US Federal Reserve to begin raising its policy interest rate as soon as March to rein in rapidly rising prices, central banks in many emerging markets are already far ahead of it.

Russia, Brazil and many others began raising interest rates almost a year ago. Not for them the luxury of waiting to see whether rising food and fuel prices would turn out to be temporary or long-lasting. A history of runaway inflation in several of these countries forced policymakers to act quickly.

Brazil, for example, has steadily increased its policy rate from 2 per cent in March last year to 10.75 per cent today. It is expected to peak at 12 per cent before being pared back towards the end of this year. Consumer price inflation, running at more than 10 per cent, is expected to fall to 5.5 per cent over the same period.

This combination of high interest rates and relatively low inflation can be a giant magnet for fixed-income investors. The high yields available on hard currency bonds — issued mostly in dollars and euros from smaller emerging markets — already offer tempting annual returns in the high single digits.

For more than a decade, however, interest rates in emerging economies have been falling and their currencies weakening, making local currency bonds less appealing to foreign investors. Now with high domestic interest rates in larger emerging economies, the traditional carry trade — borrowing where rates are low to invest where they are high — could be revived, triggering a long-awaited boom in local-currency bonds.

“If I write one more report saying we are positive on EM local debt, I’ll get fired,” jokes Polina Kurdyavko, head of emerging market debt at BlueBay Asset Management. “It hasn’t worked for 12 or more years — but it could finally work out this time.

“We are at a crunch point,” Kurdyavko adds. “I don’t remember any year like this, where there are so many risk events that could turn into double-digit positive or double-digit negative returns.”

US interest rates ticking upwards present two problems. First, they reduce the appeal of investing in emerging market assets, making it harder to attract foreign capital. To put a dent in that appeal, US yields do not have to rise by very much. The inflation-adjusted yield on 10-year US Treasury bonds, which has been negative throughout the pandemic, has risen this year from about minus 1 per cent to minus 0.5 per cent.

That may not seem significant, nor very appealing when compared with the yields available from emerging markets assets. But in markets, Lubin says, direction matters as much as level. Investors seem to agree. With the exception of China, emerging market stocks and bonds suffered as much as $7.7bn in outflows of foreign money in January, according to data from the Institute of International Finance.

The second problem with increasing US rates is that they tend to make the dollar rise against other currencies. For developing countries, where currencies are often volatile, this increases the cost of servicing any existing dollar-denominated debts and makes foreign finance expensive, putting a further damper on investment.

It is also bad for trade, which needs investment in logistics and supply chains. There is a growing body of evidence that such costs outweigh any benefits to exporters from their own currencies becoming more competitive against the dollar. In the short term, says Gita Gopinath, chief economist at the IMF, “the extensive use of the US dollar in trade means that export volumes in the selling country do not react much to a depreciation of its currency”.

If inflation is falling thanks to well-executed policy, that’s a good thing. But if it is falling because GDP is slowing, that is decidedly negative. Emerging markets are not just slowing relative to developed ones. In many places, output is plummeting. In Brazil, for example, GDP growth is forecast to fall from 4.7 per cent in 2021 to 0.3 per cent this year, according to a central bank survey of economists.

One cause of the slowdown is debt. Rich countries, led by the US, threw all they could at the pandemic when it struck, pouring trillions of dollars into their economies in a bid to stimulate activity and support businesses and populations in difficulty.

What support these countries did provide was largely funded by debt — made cheaper for some governments by the trillions poured into financial markets by the Fed and others. Data compiled by Fitch show the median level of government debt to GDP in 80 emerging markets rising from just under 50 per cent in 2019 to more than 60 per cent in 2020 — a huge increase for a single year.

The problem is particularly acute for the 50 smaller economies rated by Fitch, where not only are debt levels higher but the share of foreign currency debt is much greater than in the 30 largest economies. That leaves those economies, which are generally weaker than their larger peers, particularly exposed to the rising dollar.

“The more debt and debt service you have, and the more foreign currency debt [you hold], the more rising US interest rates and the strong dollar are going to hurt,” says Parker.

Debt puts a brake on growth

The situation contributes to a far riskier picture for investors. Despite the broad resilience built up over recent years, many economies have had their financial buffers eroded by the pandemic. That, and the slower pace of economic growth, has contributed to their build-up in debt.

But those debts, in turn, put a brake on growth by weakening public finances and reducing the capital available for public goods and investment. This threatens to leave a legacy of fiscal difficulties that could take years to resolve.

“[It is] difficult to reduce budget deficits,” says Parker. “The pandemic has lowered living standards and increased inequality in many countries, so there are strong social pressures that make it difficult to implement fiscal retrenchment.”

A leading source of output growth for emerging economies has traditionally been global trade. But that too is deteriorating.

After a strong, trade-driven recovery for many countries last year, trade growth is set to slow sharply in 2022 and 2023 as pent-up demand dissipates, according to the World Bank. And while some countries such as South Africa were able to benefit from rising commodity exports in 2021, in others, especially in Latin America, gains were overshadowed by local difficulties, whether social, political or economic. 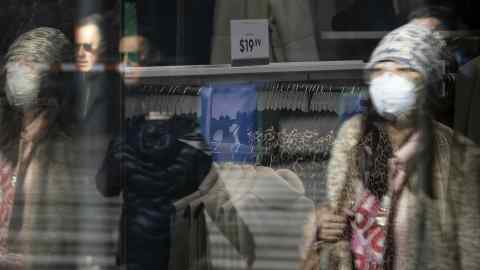 Especially problematic is the slowing pace of output growth in China, which for many years has been the biggest single engine of economic expansion for other developing countries. Changing priorities in Beijing mean that future growth will be both slower and also less import dependent, delivering a double blow to those reliant on Chinese demand.

In 2003, when Luiz Inácio Lula da Silva began his first term as president of Brazil, Chinese growth was at its most powerful. It drove the commodities supercycle that lifted hundreds of millions of people including many in Brazil out of poverty. Twenty years on and Lula is expected to take on Jair Bolsonaro, the incumbent, in October’s presidential race, against a very different backdrop. And neither candidate is thought likely to execute the kind of structural reform needed to create productive investment and growth.

“Emerging markets grow thanks to luck or skill,” says Lubin. “This year they are lacking both.”