European Central Bank policymakers expect the central bank to raise its short-term inflation forecasts next month as uncertainty persists about how quickly it will need to respond to surging prices.

The ECB has consistently underestimated how fast eurozone inflation would rise this year as the economy rebounded from the coronavirus pandemic. Members of the central bank’s governing council said they expected it to raise its 2022 forecast again in December, according to the minutes of its October meeting, published on Thursday.

But council members agreed there was “elevated” uncertainty over the outlook for price growth in 2023 and 2024, which is one of the main yardsticks that the central bank will use to calibrate bond purchases and interest rates next year.

They believe this means they should maintain “optionality” on their future bond purchases for as long as possible, so they can respond if inflation either drops back below their target or stays above.

“While an increase in the upside risks to inflation had to be acknowledged, it was deemed important for the governing council to avoid an overreaction as well as unwarranted inaction, and to keep sufficient optionality in calibrating its monetary policy measures to address all inflation scenarios that might unfold,” it said.

Eurozone inflation hit a 13-year high of 4.1 per cent in October, well above the ECB’s 2 per cent target, prompting some investors to bet that the ECB would raise rates next year.

But the ECB council agreed last month that many of the factors driving inflation higher this year — including soaring energy prices and supply chain bottlenecks — were likely to fade next year, albeit more slowly than it recently predicted.

“Members widely agreed on the expected hump-shaped pattern in the shorter-term inflation outlook,” it said.

The ECB is increasingly diverging from other major central banks, such as the US Federal Reserve and Bank of England, which have responded to the recent surge in inflation by promising to tighten policy.

December’s ECB meeting is being keenly anticipated by investors. Most expect the central bank to decide that its €1.85tn bond-buying programme, which it launched last year in response to the pandemic, will stop new purchases in March 2022.

However, the central bank is widely expected to step up its longer-standing asset purchase programme to soften the impact of the cut to its stimulus.

Some more conservative council members have argued that the ECB should be prepared to halt its purchases of new bonds quite quickly next year if inflation does not fall as expected. 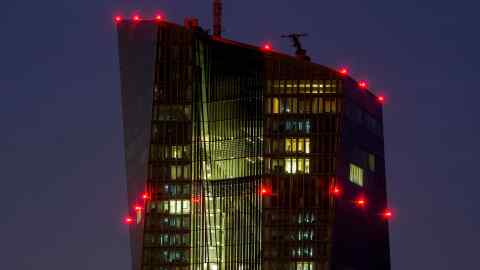 However, others have urged patience, pointing out that there have been few signs of wage increases spiralling upwards.

Council members concluded last month that they “had to be patient in the light of the elevated uncertainty,” the ECB said. “It was seen as important that the governing council should keep sufficient optionality to allow for future monetary policy actions.”

Jacob Nell, head of European economics at Morgan Stanley, said the minutes, combined with the risks from recent coronavirus lockdowns in several European countries, indicated the ECB was likely to opt for “a smooth reduction in purchases, and maintaining optionality” at its December meeting.

Fabio Balboni, senior economist at HSBC, said: “With widening divisions within the governing council and huge uncertainties about the medium-term inflation outlook it might be difficult for the ECB to commit to further support for a long period of time.”