Law enforcement agencies and scientists have analysed the genetic make-up of more than 4,000 African elephant tusks seized from poachers over the past 20 years to track international criminal cartels who ship ivory from Africa to Asia.

They believe three to five interlinked gangs dominate the illegal ivory trade which continues to drive the slaughter of the world’s largest land animals.

The slaughter of African elephants for their tusks has pushed elephants toward extinction in the wild. The continent’s elephant population has fallen from 5mn in 1900 to 1.3mn in 1979 and around 400,000 today.

Scientists working with conservation bodies and the US Department of Homeland Security published DNA analysis on Monday showing how tusks from genetically related elephant groups were split up before being shipped out to Asia, the main destination for poached African ivory. The tusks were hidden in different consignments.

“These methods are showing us that a handful of networks are behind a majority of smuggled ivory and that the connections between them are deeper than even our previous research showed,” said Samuel Wasser, director of the University of Washington’s Centre for Environmental Forensic Science, before the publication of the research in the journal Nature Human Behaviour.

“Identifying close relatives indicates that poachers are likely going back to the same populations repeatedly, year after year, and tusks are then smuggled out of Africa on container ships by the same criminal networks,” he said. “We are laying out whole smuggling networks that are trying to get these tusks off the continent.”

John Brown, an environmental crime agent at the Department of Homeland Security, said the three to five organisations believed to dominate the illegal ivory trade use “smuggling processes consistent with those used by the mafia or drug cartels in South America” but appeared less interested than them in maintaining gang loyalty.

“They’ll often work side by side, not necessarily competing with each other,” he said.

Brown said the DNA forensic analysis was already paying off by providing a “road map for multinational collaborative investigations”.

Although Brown was unwilling to talk about specific investigations, Wasser said the analysis of multiple shipments led to the arrest of two suspected criminals from the Democratic Republic of Congo who were arrested in Seattle in December. 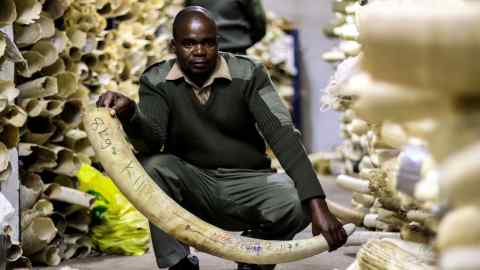 “It really strengthens prosecutions if you can show that an individual is responsible for a large number of shipments and not just one shipment,” said Wasser.

The researchers said the distribution of elephant poaching had changed in recent years, with fewer cases in east Africa and more in other regions including central and west Africa and the southern “transfrontier” region where an estimated 230,000 of the continent’s remaining 400,000 elephants live.

But Brown and Wasser said there was no evidence to show a sustained overall reduction in the slaughter. They estimate that poachers gather 500 tonnes of ivory a year, only 10 per cent of which is seized by smugglers.

The 1990 ban on the ivory trade imposed under the Convention on International Trade in Endangered Species, which has since been bolstered by bans imposed by individual countries, has not made as big an impact on poaching as had been hoped. Wasser said he and other experts believe entrepreneurs are buying tusks for stockpiling.

“It sounds horrible but they may be waiting for elephants to go extinct,” he said. “If they are holding all the ivory when there are no more elephants, they can sell it and all of a sudden they can make a fortune.”

The Trade Secrets Newsletter is the FT’s must-read email on the changing face of international trade and globalisation. Written by FT trade specialist Alan Beattie, it is delivered to your inbox every Monday. Sign up here