A summer surge of Covid-19 cases and the associated drop in consumer spending caused Japan’s economy to shrink faster than estimated during the third quarter.

Japan’s gross domestic product contracted an annualised 3.6 per cent during the July to September period, according to revised figures released by the cabinet office on Wednesday.

That was a faster pace of contraction than the 3.0 per cent rate projected by the government’s preliminary reading of third-quarter GDP released in mid-November. A consensus of analysts polled by Bloomberg had expected the revised rate of shrinkage to come in at 3.2 per cent.

The faster rate of contraction relates to a period in which Tokyo hosted the Olympic Games without fans and shortly afterwards, when daily Covid-19 infections soared in big cities.

Although no formal lockdown was ordered, the surge in cases prompted many restaurants and bars to limit hours of operation.

The sharp drop-off in consumption under those conditions, said bond and equity traders in Tokyo, could augur badly for the coming months if consumers respond similarly to a rapid rise in infections related to the Omicron variant.

Although Japan in general — and Tokyo in particular — has managed to achieve one of the lowest infection rates in the developed world since the summer without imposing more severe restrictions on public life, officials are wary of the Omicron variant.

Japan was quick to tighten border controls on foreign arrivals with strong public backing, according to opinion polls, denting hopes that its tourist economy was anywhere close to reopening.

In the preliminary estimate, private consumption was calculated to have fallen 1.1 per cent from the April to June quarter. The revised drop was 1.3 per cent.

Net exports also caused a heavier drag than expected in the earlier estimate. The government meanwhile made upward revisions to capital expenditure and housing investment.

But economists warned against overstating the deterioration. 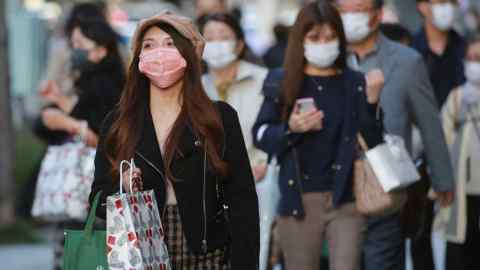 He noted that the cabinet office also revised the April-June quarter upward by 0.5 percentage points.

“These revisions mostly offset each other. It wouldn’t be accurate to assume that the Japanese economy has deteriorated more severely than the cabinet office previously announced,” said Miwa.

But the 0.6 per cent decline from the same month a year earlier was slower than the pace logged in August and September. That supported hopes that Japan’s consumer economy would begin to recover more strongly as pandemic restrictions were eased and the country’s high rate of vaccinations reassured customers to return to restaurants and shops.