The UK’s economic recovery from coronavirus is expected to withstand the imposition of the government’s “Plan B” restrictions, but the Bank of England is likely to push back raising interest rates, economists have said.

With real-time data showing strong levels of spending since the Omicron variant was discovered at the end of November, households appear determined to enjoy the Christmas period even if some sectors, such as inner city hospitality, will be hit by the new work from home rules.

The latest data from the Office for National Statistics, alongside evidence that companies and people have learnt to adapt their operations to Covid-19 restrictions, have encouraged economists to think that the impact of Omicron will be nothing like as severe for the UK economy as earlier waves of infection.

Under the Plan B measures, the legal requirement to wear face masks has been extended, Covid passports or negative lateral-flow tests introduced for large events and a work from home recommendation brought in from Monday.

Allan Monks, UK economist at JPMorgan, said the work from home element of Plan B was the most significant of the measures because “it will prevent some forms of spending from occurring”, but he thought “the economic impact is likely to be small”.

Even the requirement to avoid the office should not be too disruptive to economic growth, said Peter Cheese, chief executive of the CIPD, the industry body for human resources’ professionals.

“Many businesses and their people have learned how to work remotely at scale and at speed during the pandemic, so will be well placed to respond to this change in guidance,” Cheese said.

Contradicting prime minister Boris Johnson’s view that work Christmas parties should go ahead even though people should steer clear of the office, Cheese added: “We’d encourage organisations to follow the spirit of today’s revised guidance and to avoid any in-person end of year parties.”

With many Christmas parties already cancelled, at a cost to the hospitality sector, the spending foregone has failed to significantly dent recent economic activity, suggesting the economy will end the year on a high.

On Thursday, official real-time data from Chaps, the clearing house automated payment system, showed that credit and debit card purchases in the week ending December 2, were 21 per cent up from pre-pandemic levels and the highest since Covid hit the UK.

Separate debit card figures, compiled by Fable Data, showed that household spending recovered strongly in the week ending December 5 to be 10.7 per cent higher than the equivalent week in 2019.

Figures from the Bank of America’s own proprietary survey corroborated that the arrival of Omicron seemed “to have had little effect on confidence”.

Ahead of the announcement of the Plan B restrictions on Wednesday, Christian Schulz, economist at Citi, said the measures were “likely to prove much less disruptive than a full lockdown, which we continue to think will be avoided”.

A few economists and industry groups have struck a more concerned note in response to the government’s plans, with the Trades Union Congress calling for a reintroduction of the furlough scheme for employees and companies hit by the work from home measures.

In a somewhat unlikely alliance, the Institute of Economic Affairs, a free market think-tank, warned that Plan B could cost the economy £4bn a month, roughly 2 per cent of gross domestic product.

Julian Jessop, economics fellow at the institute, said this would “force the taxpayer to stump up billions more to prevent a new wave of bankruptcies and job losses”.

Most economists believe the IEA estimates exaggerate the economic impacts, which fall far short of the 25 per cent drop in GDP in April 2020 due to the onset of the pandemic.

Monks at JPMorgan estimated that the hit would be only 0.5 per cent of GDP for December and January following a period of economic strengthening in the autumn.

Each subsequent wave of Covid-19 has caused less damage than the last, as the population has adapted to health restrictions, aided by government employee support measures.

But the risk that the Omicron wave will be more severe than previous variants, requiring further measures later down the line, is likely to be sufficient to persuade the BoE not to raise interest rates at its meeting next Thursday, economists said.

Steffan Ball, UK economist at Goldman Sachs, said he had changed his previous forecast that the BoE would raise rates this month. He believes the central bank’s Monetary Policy Committee would find it difficult to explain an increase just after new restrictions had been imposed. 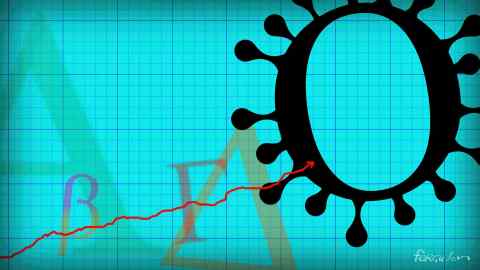 “We expect the MPC to signal that this is only a short delay to gather more information on Omicron, and indicate that a hike remains appropriate in coming months.”

Financial markets agree with this assessment, with a low probability placed on a rate rise next Thursday, and will instead be increased from 0.1 per cent to 0.25 per cent at the following MPC meeting in February.

Martin Beck, chief economic adviser to the EY Item Club, said investors’ current prediction that the committee will not increase rates in December looked like “a more reliable bet”.