Beijing has hit back at US criticism of Xi Jinping’s absence from the COP26 climate summit and said that the Chinese president was not allowed to join the main stage by video link.

The spat has further distracted from the critical question of whether countries are moving fast enough to combat global warming.

More than 100 world leaders descended on Glasgow for high-level talks over governments’ climate targets, and on Monday and Tuesday gave speeches as part of a World Leaders Summit.

However, Xi, who has not left China since the beginning of the Covid-19 pandemic, submitted a written statement only, raising questions about his country’s participation.

China’s foreign ministry spokesperson Wang Wenbin said “the host of the conference did not provide the option to participate by videoconference”.

US president Joe Biden on Tuesday scolded China, Russia and Saudi Arabia for failing to attend the summit hosted by the UK and the UN.

“The fact that China, trying to assert a new role as a world leader, [is] not showing up? Come on. The single most important thing that has got the attention of the world, is climate, everywhere,” Biden said in his final press conference before leaving Glasgow. “It is a gigantic issue, and they have walked away.”

In a press conference on Wednesday, Wang responded: “The US, as the largest cumulative emitter of greenhouse gases, should face up to its historical responsibilities and show greater ambition to reduce its emissions . . . slogans are no substitute for action.”

Alok Sharma, the UK’s COP president, confirmed that no country was given the option to join the World Leaders Summit by video link.

“We have been very clear and insistent on this issue right from the start. We always said that participation in the World Leaders Summit was going to be physical participation,” he said. “We had 120 leaders come . . . and some of them have made a challenging journey to come here.”

Russia’s President Vladimir Putin sent a video address that was shown at a side-summit, but not on the main leaders’ stage.

As the two biggest emitters in the world, the US and China often set the tone for COP summits — and Xi and former president Barack Obama teamed up ahead of the 2015 Paris climate accord.

However, disputes over trade and security — as well as playing to domestic audiences — has led to public acrimony ahead of COP.

Environmentalists are becoming increasingly concerned that climate talks will suffer without sufficient leadership from the world’s two biggest economies. That is despite a series of meetings this year between John Kerry and Xie Zhenhua, the climate envoys of the US and China.

Li Shuo, an energy policy officer at Greenpeace, said broader geopolitical tensions between the US and China appeared to be seeping into the COP talks, after Biden’s remarks.

“We are in a ‘kettle calling the pot black’ situation, and that is not good,” said Li Shuo. “If you make it about the US and China — neither of them are in any position to claim a leadership role [on climate], if you look at what they are doing at home.”

China has been battling energy shortages in the lead-up to the conference, prompting the government to increase coal production, a move that risks undermining Beijing’s longer-term climate goals. 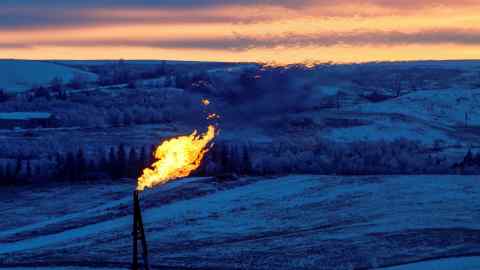 Rising tensions with key suppliers of fossil fuels, notably the US and Australia, have underscored the vulnerability Beijing faces in depending on other countries for fossil fuels.

“The leadership is very risk-averse with the economic slowdown and important political events on the horizon and any major push with energy entails a lot of risk,” said Isabel Hilton, founder and editor of China Dialogue.

Xizhou Zhou, vice-president in the Climate and Sustainability Group at IHS Markit, said that while China was increasing coal production, it was also limiting demand from heavy industry.

“The Chinese steel sector uses the equivalent amount of electricity as all of Germany, so by rationing their power supply, the energy crunch can be greatly moderated, with little need to actually ramp up coal,” he said.

“At COP26, the Chinese delegation will have to impress on their counterparts that the demand management piece is critical to this,” Zhou added.