German banks are becoming too complacent about the risk of borrowers defaulting and the potential for interest rates to rise, particularly in the country’s booming mortgage market, the deputy head of its central bank has warned.

Claudia Buch, vice-president of the Bundesbank, told the Financial Times that banks had emerged relatively unscathed from the recession caused by the coronavirus pandemic but are overly optimistic about the future.

“We think credit risks are underestimated,” said Buch. “The models that banks and market participants are using are based on historical data. These data might underestimate future macro risk, which is an implicit bias.”

Buch, a member of Germany’s financial stability committee alongside officials from the finance ministry and the financial watchdog BaFin, added that “we see a shift within the corporate loan portfolios of banks to the relatively weaker firms”.

Although the German economy contracted 4.6 per cent in 2020 after the pandemic hit — a record postwar recession — the number of companies going bankrupt has fallen sharply thanks to generous government loan guarantees and wage subsidies for furloughed staff.

“All the [risk] indicators we look at, including the credit to GDP gap, are pointing upwards,” said Buch. “We are concerned about mortgages but we are also very concerned about this macro environment, which if you look at recent history looks too benign to be true.”

One of the biggest areas of concern is the German property market, where house prices rose 12 per cent and mortgage lending increased 7.2 per cent in the year to September — both reaching multi-decade highs, despite the fallout from the pandemic.

Germany’s financial regulators have responded last week by announcing a €22bn increase in the amount of capital they require banks to hold by February 2023 and promising to supervise lending standards more closely.

This means German banks will need an extra capital buffer equal to 0.75 per cent of their domestic assets and another equal to 2 per cent of their residential mortgages — both adjusted for riskiness. A more modest version of the policy was proposed in 2019 but then dropped because of the pandemic.

The extra capital buffers — which mirror similar plans in the UK, Sweden, Norway and Denmark — are designed to make banks more resilient by allowing them to absorb potential future losses without having to cut the supply of credit to businesses and households.

The association of German banks complained that the changes came “at an inopportune time” amid high economic uncertainty and risked “putting a handbrake” on their lending capacity that could push more business to less regulated mortgage providers.

But Buch said German banks had increased the excess capital they hold above minimum requirements by about €30bn in the past two years to almost €190bn, meaning only “a very, very small fraction” of them need to raise extra capital now.

German interest rates have fallen to record lows in recent years, after the European Central Bank cut its deposit rate to minus 0.5 per cent and bought more than €4.5tn of bonds. Several of the country’s banks are offering 10- or 15-year mortgages at rates below 1 per cent, according to Tatjana Gopp at Baufi24, a German mortgage adviser. 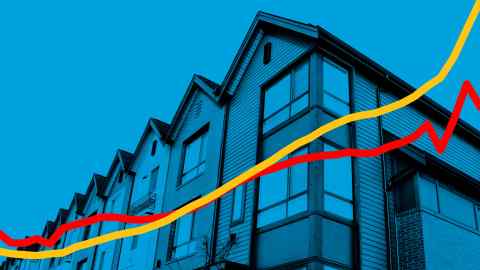 The Bundesbank vice-president said banks had increased their “exposure to interest rate risk” as the proportion of new German mortgages with interest rates fixed for at least 10 years had more than doubled since 2010, when the housing market upswing started.

“There is a much longer credit maturity on these mortgages outstanding, meaning that if interest rates increase the banks would have higher refinancing costs but their asset values wouldn’t change that much,” she said.

The ECB has said it is “very unlikely” to raise interest rates this year, but markets are pricing in a 0.1 percentage point increase in its deposit rate in October.

Low interest rates have helped boost German house prices by almost 60 per cent since 2015 and the Bundesbank estimates the market is now 15 to 30 per cent overvalued.

Buch said she hoped the new rules would provide “a bit of an incentive” for lenders to “think twice” about the recent trend for some to provide mortgages for the entire value of a property with little or no deposit. If such high-risk mortgages proliferate, regulators could impose new rules limiting the amount banks can lend against a property.

“The intention is not really to tame the property price cycle but to make sure that whatever financing there is sound and the borrowers can actually afford it,” she added.