Joe Biden returned to Washington this week with a snowstorm paralysing the US capital, a fitting backdrop for a president who starts the new year battling multiple crises from a surge in coronavirus infections to a stalled economic agenda and rising tensions with Russia.

The Omicron variant, which has resulted in a record number of daily infections, put the Biden administration immediately on the defensive, especially over crippling testing shortages and confusion surrounding its decision to cut in half the amount of time that asymptomatic people must isolate, from 10 days to five.

On Tuesday, Biden was forced to warn yet again of tough times ahead. It was a humbling moment for a president who entered office almost a year ago with high hopes of crushing the virus, and who was elected in large part for his promise to manage the pandemic more competently than his predecessor.

The resurgence of the pandemic has happened just as Biden’s polling numbers had started to recover from a sharp decline, which started in August around the time of the botched withdrawal from Afghanistan and continued throughout the second half of 2021.

On the economic front, a strong rebound has been hampered by high inflation and supply chain disruptions, which have clouded the improvement in the labour market and buoyant equity prices while also hitting voter perceptions of Biden’s handling of the economy.

On Tuesday, Manchin made it clear that he saw little prospect of reviving talks on the legislation, telling reporters there had been “no conversations” since he announced his opposition to the plan. “I feel as strongly today as I did then,” he added.

James Lucier, an analyst at Capital Alpha Partners, said he thought that there was still a chance that Democrats could pass a spending bill worth about $1.5tn, but warned: “Every week that goes by without a deal makes it harder and harder to see this happening.”

At the same time, Biden’s foreign policy agenda has been dominated by the possibility that Russian president Vladimir Putin will invade Ukraine, testing alliances with Europe and the administration’s commitment to countering authoritarian aggressions.

Each of these difficulties threaten to make it harder for Biden and congressional Democrats to prevent Republicans from winning control of Congress in the November midterm elections, a scenario that would significantly limit the president’s legislative ambitions in the remaining years of his term.

“Biden’s most important task is to show why America went from electing the president with the fewest years of governing experience in history to the one with the most,” said Ben Koltun, an analyst at Beacon Policy Advisors, a Washington consultancy.

Koltun said Biden must close “a deal with Senator Joe Manchin on Build Back Better”, put “America in a strong position on dealing with Russia”, and provide “some semblance of a strategy on Omicron and inflation”.

He added: “Otherwise, it’s a narrative that Biden isn’t leading, but is being led by Manchin, Russia and Omicron.”

With talks on Biden’s economic plans stalled, Democratic leaders in Congress have turned their attention to legislation to protect voting rights — an attempt to counter Republican moves in many states to restrict access to the ballot box.

But securing passage of voting rights legislation may well be a fruitless mission: Republicans are implacably opposed, while moderate Democrats such as Manchin and Kyrsten Sinema, the Arizona senator, are wary of changing Senate rules so that the measure can pass with a simple majority of votes.

While some Democratic strategists and lawmakers say pressing ahead with the legislation is important for firing up the party’s base, others warn pushing a bill that is likely to fail could be politically counterproductive.

He added: “They need a way to convey that they — and this country — are in a sustained battle between two very different concepts of America’s future, a battle in which disengagement or disappointment by Democratic voters will guarantee defeat.” 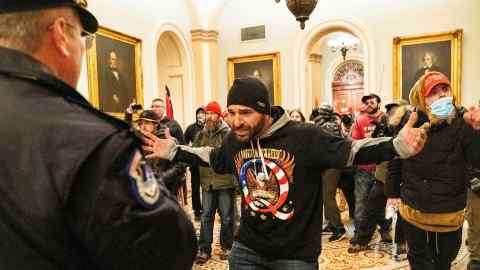 But the White House is still trying to keep the focus on kitchen table issues. On Monday, Biden touted his administration’s plans to tame inflation, particularly prices for meat. And on Friday he is expected to address the December jobs report, which might provide the last glimpse of how the labour market was recovering before the economy was hit by Omicron.

Andrew Bishop, global head of policy research at Signum, a consultancy in Washington, said Biden may be “less doomed” than his current approval ratings suggest. Signum points out that he still has higher ratings than Trump, and that the decline has been less steep than that experienced by Barack Obama during his first year in office.

“By being more generally palatable to centrist voters than some of his predecessors were, Biden arguably may have the potential to regain independents’ support faster,” said Bishop.