The Bank of England has intensified the squeeze on household finances with its first back-to-back interest rate rise since 2004 as the central bank forecast inflation will increase to 7.25 per cent in April.

By a majority of five to four, the bank’s Monetary Policy Committee voted to increase the cost of borrowing on Thursday from 0.25 per cent to 0.5 per cent. The minority wanted an even larger increase to 0.75 per cent to get a grip on surging inflationary pressure.

The pound climbed following the decision, with sterling increasing 0.2 per cent against the dollar to $1.360.

Traders increased their bets on future rises in borrowing costs, with markets now expecting the BoE to lift interest rates to at least 1 per cent by May, and 1.5 per cent by November — a level that was not expected to be reached until March next year prior to Thursday’s announcement.

The four votes for a half-point rate rise were “a hawkish turn markets did not expect”, said Anna Stupnytska, an economist at Fidelity International.

The rise in official interest rates, alongside the highest rate of inflation for more than 30 years, would squeeze disposable household incomes by 2 per cent this year, with a further 0.5 per cent hit in 2023. That would be the biggest annual reduction in spending power since at least 1990, said BoE officials.

This would depress spending and reduce the UK growth rate to a crawl of about 1 per cent a year. However, the pain for households would help bring inflation down towards the bank’s 2 per cent target within two years, the MPC said.

In an effort to increase the power of monetary tightening and bear down on inflation, the MPC voted unanimously not to reinvest any of the £875bn of government bonds it has bought under quantitative easing programmes when they mature.

Under the passive quantitative tightening programme, the BoE said it would not reinvest the proceeds of £28bn of maturing government bonds in March and that £70bn of bonds would mature and would not be reinvested during 2022 and 2023.

UK government bond prices fell on the news that the bank will begin to reduce the stock of gilts it holds. The 10-year gilt yield climbed 0.11 percentage points to 1.36 per cent.

The MPC did not take the government’s package of support for energy bills into account when it set interest rates, officials said, but they added that this would not have had a material effect on its interest rate decision.

The entire committee said there was still a need for “further modest tightening of monetary policy” in response to the inflationary threat “in coming months”.

According to the minutes of the meeting, the majority of the MPC members who voted for the quarter point rise said that inflation would remain “materially” above the bank’s 2 per cent target this year while the economy weakened as households were squeezed. Inflation would remain over 5 per cent by the end of the year, the BoE said.

The bank also reduced its economic forecast significantly, saying that UK economic growth would soon “slow to subdued rates” of around only 1 per cent a year. 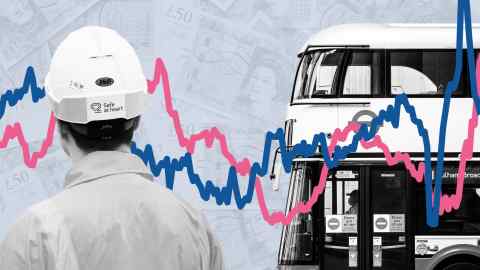 The committee’s vote for a small increase in rates reflected “the risks from the possibility of stronger domestic wage and price pressures in the near term”, but also the “potential for inflation to fall more quickly” if energy prices came down. Members preferred gradual movements in interest rates.

The minority who preferred an immediate half point rise in interest rates were worried about the repeated inflation forecasting errors made by the BoE in the past year. They saw emerging signs that companies were expecting to raise prices significantly and that workers were demanding and receiving large pay rises. They said these features “could make CPI inflation more persistent” than the central forecasts predicted.

The five members voting for the quarter point rise were Andrew Bailey, governor, Ben Broadbent and Sir Jon Cunliffe, two of his deputy governors, Huw Pill, the BoE’s chief economist, and Silvana Tenreyro, one of the external MPC members.

The four voting for a larger rise were Sir Dave Ramsden, another deputy governor, and Jonathan Haskel, Catherine Mann and Michael Saunders, three external members of the MPC.