Australia’s economy contracted in the third quarter but the decline was less severe than forecast, raising hopes of a full rebound in the final three months of the year.

Gross domestic product fell 1.9 per cent from July to September compared with the previous quarter, the third-largest quarter-on-quarter decline on record, after lockdowns to contain the Delta coronavirus variant weakened demand.

But the fall, which followed four consecutive quarters of growth, beat expectations of a 2.7 per cent contraction forecast by economists polled by Reuters.

Government support eased the impact on household consumption, with consumer spending given a boost after lockdowns were lifted.

“Households are sitting on savings, businesses have shown resilience and the public sector has done the heavy lifting, cushioning the Delta disruption and underwriting a smaller than expected contraction in today’s national accounts,” said Jo Masters, Oceania chief economist at EY, the professional services firm.

“This strength shows in the fact that we’ll only need 2 per cent growth in the December quarter to get the economy back to pre-Delta levels — which is achievable even in the face of Omicron,” she added, referring to a new coronavirus variant discovered in recent days.

Official data from the Australian Bureau of Statistics showed growth in the third quarter was mainly attributable to exports and government spending.

The economy grew 3.9 per cent compared with the same period in 2020, shortly after lockdowns were first imposed, and down from a 9.5 annual rate in the second quarter of this year.

Tapas Strickland, director of economics at National Australia Bank, expected a sharp rebound in the final three months of 2021 based on employment data, household consumption and demand in the current quarter.

“There is good reason to expect a very sharp rebound in the fourth quarter and growth back to pre-lockdown level,” he said.

The Reserve Bank of Australia has forecast 3 per cent annual growth for 2021.

Australia’s unemployment rate rose to 5.2 per cent in October but recent payroll data showed employment would tick up in November and more than recoup the declines associated with lockdowns. 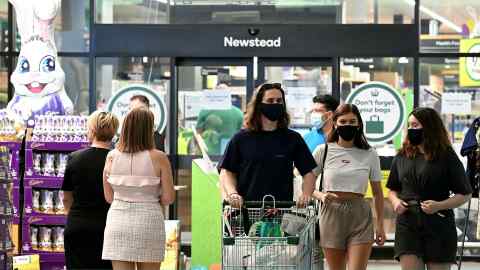 The economy was already experiencing skills shortages and plans to reopen borders to international students and those on working holidays were expected to alleviate the pressure. But the government announced the measures would be delayed until December 15 following the emergence of the Omicron variant.

In contrast to the global economic picture, Australia has not been hit by inflationary pressures because wage growth remains weak and the country has not faced high energy costs.

The ABS said the shorter and sharper lockdowns implemented from late 2020 had a markedly different impact on household consumption from measures taken earlier in the pandemic.