Latest polls show the ruling Peronists trailing the centre-right opposition alliance by over 8 percentage points nationwide. Such an outcome, if repeated this weekend, could cost Fernández his majority in the Senate and further complicate the government’s position in the lower house, where it relies on the support of independents to pass laws.

In another sign that the government could face a serious defeat, protests this week broke out in La Matanza, a working-class district of Buenos Aires long loyal to the Peronists to demand “a better future” after a 40-year-old shopkeeper was shot dead on his doorstep.

“They complain that young people are leaving the country, but they don’t do anything to make them stay,” Tomás Sabo, one of several hundred demonstrators said of the government. “I want to leave [ . . .] they don’t give me anything here,” he said.

La Matanza, home to roughly 1m people, has voted Peronist in every election since Argentina’s return to democracy in 1983. During primaries in September the ruling coalition outperformed the opposition by 19 points in the neighbourhood. As prices soar and salaries fail to keep pace, support for the government is waning.

The bigger question once the ballot results are in, according to senior analyst Ignacio Labaqui at Medley Global Advisors, is whether come Monday the Fernández government will “address the deep imbalances that the Argentine economy faces”, including high state subsidies and a fiscal deficit financed by printing money, or dedicate itself, in the words of a famous tango song “to endure and go by”.

Voting is mandatory in Argentina, although fines for non-compliance are minimal and turnout has been falling in recent years. Sunday’s election will give an early indication of the opposition’s strength as it prepares for a presidential race in two years’ time. Half of the lower house and one-third of the Senate is up for renewal this weekend.

Horacio Rodríguez Larreta, the popular Buenos Aires city mayor, hopes that clear wins for his allies in the capital and the surrounding province of Buenos Aires, home to almost 40 per cent of the electorate, would make him favourite to lead the opposition when the 2023 race comes around.

Looking to cool public anger ahead of the ballot, the government has stepped up its Covid-19 vaccine drive, increased social spending and frozen the prices of more than 1,400 household items.

However, the price controls have failed to tame inflation, which is running at an annual rate of 52.1 per cent, according to the latest official data. Poverty levels have risen. Some 40.6 per cent of Argentines were living in poverty in the first half of 2021, up from 35 per cent when Fernández took office. 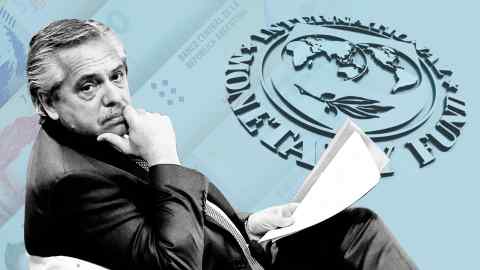 The value of the dollar on the parallel market has soared to almost double the official level in recent weeks as Argentines bet that the government will be forced to devalue the peso, something Martín Guzmán, economy minister, insists will not happen.

Businesses blame the government for scaring away investors. Strict import and capital controls have hurt growth. Net foreign exchange reserves are dwindling, and with limited access to international markets, the central bank’s balance sheet has deteriorated sharply this year.

Fears are mounting that Buenos Aires will not be able to reach agreement with the IMF on rescheduling $44bn of debt, most of which comes due for payment next year and in 2023. The government says it does not have the money to pay.

Argentine economist Eduardo Levy Yeyati observed how the government has nowhere to go: “Peronists know that a financial crisis is the end of a government,” he told the Financial Times.