Argentina has hardened its position as a deadline looms for renegotiating $45bn of debt owed to the IMF, insisting that the Washington-based lender cuts the rates it charges and supports the government’s economic plans to secure a deal.

After a year of inconclusive discussions, time is running short before a $2.8bn repayment to the Fund comes due next March, part of $19bn that must be repaid in 2022. Argentina’s Peronist government says it cannot pay amid an economic crisis and has not included money for the IMF in next year’s budget, banking instead on a restructuring.

Economy minister Martín Guzmán told the Financial Times that, although his side had worked in a “very constructive” way so far, “it is important . . . that the IMF also does more from its side”.

“We hope that the shareholders support a modification of the policy of [interest rate] surcharges which damages the macroeconomic sustainability of our country and that they support the macroeconomic programme which the government is proposing.”

The IMF has said it is continuing an “active and cordial dialogue” with Argentina on a new programme but has not so far agreed to drop the surcharges.

IMF rules add a surcharge of 2 percentage points to loans that are particularly large in relation to the borrowing country’s quota, or capital at the Fund. These charges, which are designed to discourage large and prolonged use of IMF resources, increase to 3 percentage points if the bigger loan lasts more than three years.

Argentina is liable for surcharges but has campaigned for them to be scrapped, saying they run counter to the IMF’s mission because they penalise countries in difficult economic circumstances instead of helping them.

However, officials close to the talks say several key IMF shareholders oppose scrapping the surcharges and have pointed to Argentina’s history of pleading for special treatment, and then disappointing creditors by veering off track again. “They are not the country you would want to make an exception for,” one official observed.

Argentina has also been criticised for failing to offer credible projections in vital areas such as reducing the budget deficit or bringing down inflation, which is running at more than 50 per cent a year despite government-imposed price and exchange rate controls.

Marc Stanley, Joe Biden’s nominee as US ambassador to Buenos Aires, told a Senate confirmation hearing on Tuesday that “Argentina . . . is a beautiful tour bus that doesn’t have the wheels working right”, adding: “It’s the Argentine leadership’s responsibility to come up with a macro plan to pay [the IMF debt] back and they have yet to do so.”

After Guzmán secured a deal with private sector creditors last August to reschedule $65bn of debt, hopes rose that an IMF agreement would swiftly follow. That optimism is evaporating amid increasingly hostile attacks from the government on the IMF, a perennial villain in Argentine politics.

“The latest rhetoric has become much more inflammatory against the IMF ahead of elections,” wrote Siobhan Morden, head of fixed income at Amherst Pierpont, in a recent note. “However, the radicalism would only serve to further undermine already weak investor sentiment and accelerate [dollar] demand . . . The tough talk against the IMF and inward isolation is not a viable medium-term strategy.”

Argentina’s government has been particularly critical of the $57bn IMF standby loan extended to the previous government of Mauricio Macri in 2018, saying it should never have been granted because it financed capital flight and was politically motivated. 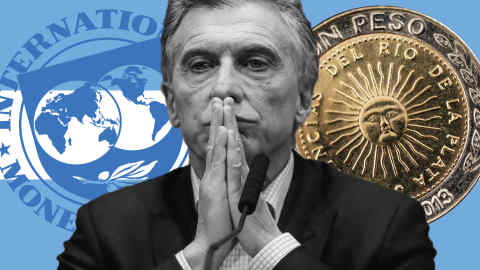 Guzmán had been seen as one of the more moderate ministers but with support for President Alberto Fernández’s government flagging ahead of mid-term elections on November 14, he has hardened his rhetoric.

Eyebrows were raised among investors when Guzmán told a public forum in Buenos Aires last weekend that the IMF loan had “financed Macri’s [re-election] campaign” — an accusation normally associated with the radical wing of the government led by vice-president Cristina Fernández de Kirchner.

Guzmán also defended the government’s decision on October 19 to freeze the price of more than 1,400 household items until January, saying the state needed to step in when business leaders failed to agree to a voluntary pact to control prices.

Asked whether his economic views were now similar to those of Kirchner, Guzmán played down differences, saying: “We clearly share visions about the role which the state plays in economic recovery and economic development.”

“Guzmán lost a golden opportunity to sign a deal with the IMF in early 2021 when the pandemic was at a peak and the US position was less hard,” said one senior banker in Buenos Aires. “Now, Argentina is further and further away from reaching a deal.”