The latest western efforts to boost cash flows into Afghanistan will do little to tackle the country’s growing humanitarian crisis without wider reforms to get money to ordinary people, aid agencies have warned.

The US and the UK Treasury have both issued clarifications in the past few days in a bid to reassure banks that payments for basic human needs including food, health and education will not violate sanctions against the Taliban leaders who seized power last year.

But aid agencies say the effect will be modest without the release of frozen Afghan central bank reserves to restore interbank lending and foreign exchange transactions, stimulate a resurgence of the banking sector and an unblocking of donor funds locked by the World Bank to kick-start the economy.

While the latest guidance has eased banks’ concerns over penalties if some transferred funds ultimately pass through Taliban-controlled ministries, the heavy costs of due diligence mean many banks remain reluctant to resume operations.

It’s no good having all the best humanitarian efforts and actors trying to find solutions if the underlying economy is not operating.

Martin Hartberg, UK director of the Norwegian Refugee Council, said: “Without a functioning central bank it will simply be impossible to get sufficient banks notes circulating in the economy, not just for aid agencies to scale up our humanitarian programmes, but for Afghan households and businesses to survive.”

A survey by his group of 72 non-governmental organisations in Afghanistan at the end of 2021 showed that 85 per cent considered unblocking international bank transfers to be “critical” to their operations.

Its analysis suggested a number of the country’s banks which were used for sending funds to aid workers and local recipients were facing collapse.

Matt Reed, chief executive of the Aga Khan Foundation in the UK, said: “Sanctions and the freezing of the banking system have had a chilling effect. Even if a bank makes transfers, there is a liquidity problem, with not enough money circulating for the economy to function. It’s important that the banking sector steps up. We can’t do this without them.”

International aid made up around 80 per cent of the previous Afghan government’s budget. But after US and Nato forces left following the Taliban’s takeover in August, governments cut off aid and froze more than $9bn in central bank reserves held overseas.

Sanctions that had been imposed on the Taliban were broadly applied to Afghanistan’s financial system and civil service, leaving banks unable to make transfers and disburse cash. A sharp drop in the afghani has stoked painful inflation in the import-dependent country.

Some Afghans have resorted to the underground hawala network to transfer money outside the banking system, but larger organisations and businesses have been unwilling to use this informal route as it is illegal in nearby countries like Pakistan. Dollars have been smuggled out of the country while the lack of currency printing presses has left hard currency in short supply. 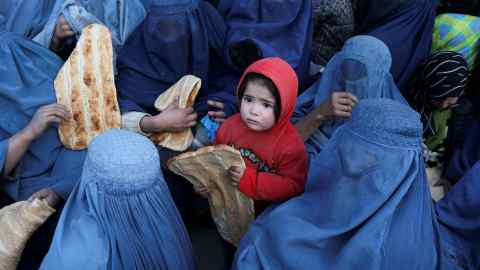 Separately, the World Bank’s board is not set to discuss until at least later this month calls to release via a UN intermediary over $1bn in funds in its Afghanistan Reconstruction Trust Fund for teachers, healthcare workers and other public sector employees who have been left struggling without pay for months.

David Miliband, head of the International Rescue Committee, warned of the broader consequences. “What is crushing is the economic strangulation of the country. This is partly about public sector salaries but also private sector activity squeezed out by banking illiquidity and the chilling effect of sanctions. We are running up a humanitarian crisis very fast.”

David Pitts from Crown Agents Bank, which transfers money into Afghanistan for the Aga Khan Foundation, said: “It’s no good having all the best humanitarian efforts and actors trying to find solutions if the underlying economy is not operating. If you can’t import basic foodstuffs, fuel and medical equipment, all good efforts will be undermined.”