The UN has forecast that Afghanistan’s gross domestic product will contract 20 per cent within a year following the Taliban’s takeover of the country, representing one of the worst economic meltdowns in history.

“[It’s] an economic contraction that we’ve never seen before, ever,” said Abdallah Al Dardari, the UN Development Programme’s Afghanistan head and a former deputy prime minister of Syria. “I’m comparing with Venezuela, Lebanon and so on — we haven’t seen such an immediate, abrupt drop.”

A UNDP report published on Wednesday said such a contraction took five years of civil war in Syria to achieve, and was expected to worsen to 30 per cent next year.

The sharp economic decline highlights the fragility of the Afghan state despite almost two decades of US-led assistance and billions of dollars in aid. The country was not strong enough to withstand the recent shocks of the Covid-19 pandemic, droughts and the militant Islamist group’s takeover, according to the authors of the report.

The UNDP forecast that per capita income in Afghanistan, already the poorest country in Asia, would drop to $350 next year from $500 in 2020, having already fallen from a peak of $650 a decade ago.

The economy had relied on foreign aid, which the UNDP said accounted for as much as 80 per cent of budget expenditure.

Afghanistan’s foreign currency reserves, which amount to almost half of the country’s $20bn annual gross domestic product, were also frozen soon after the Islamists took over this year, prompting a cash and liquidity crisis.

Hundreds of thousands of workers are owed months of salaries, hospitals are on the brink of collapse and nine out of 10 Afghans are expected to fall below the poverty line by next year. More than half of the 39m population require food assistance, with about a quarter facing “emergency” food insecurity and potential famine.

“Even in very bad situations like Lebanon, they still have access to some remittances from the Lebanese diaspora,” said Adnan Mazarei, an economist at the Peterson Institute think-tank in the US, and one of the report’s authors. “In the case of Venezuela, there’s still oil. Afghanistan is almost in a class by itself.

[In] countries that have been hit by natural disasters . . . there’s a prospect for getting out of some of those problems,” Mazarei added. “It’s not in store for Afghanistan yet.”

The crisis has become so entrenched that it is too late to avoid a breakdown, the report’s authors said, though measures such as unfreezing reserves and aid and providing cash transfers to families would help. 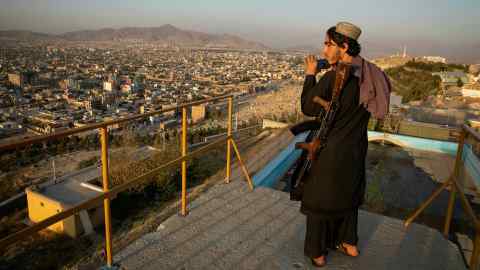 “Even if the assets are unfrozen, humanitarian aid doubles and triples, it will not be enough to mitigate let alone avert the crisis that we’re seeing,” said Zafiris Tzannatos, a professor at the American University of Beirut. “Now we’ve fallen off the cliff. No matter how much we provide, still there is a crisis that is sliding to become a catastrophe.”

The UNDP said the Taliban’s own policies were exacerbating the breakdown.

The group’s decision to restrict women from work and education will have a severe economic cost, according to the report. The UNDP estimates that the loss of female employment could cost up to $1bn, or 5 per cent of GDP, and slash productivity.

“If you fail to invest in the human capital of half your population . . . then you’ll have a loss for many years to come,” Tzannatos said.